Icelandic Jazz Round Up 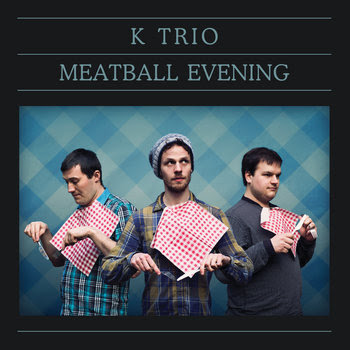 A change of browsers has unlocked my blog! Now using "Chrome" instead of  "Internet Explorer." Hope that is the solution.

Lots of good jazz being written and performed by Icelanders, as I found out in 2011 and again this past month. Bought some music by the same artists as I did before, but also found some new and exciting music as well. Without further ado.

K-Trio, "Rekavidur" (Dimma 201) and "Meatball Evening" (Dimma 2013): K Trio was formed by pianist Kristjan Martinsson in 2008 for his final recital at the Icelandic Musicians Union School of Music. His mates were Petur Sigurdsson on bass and Magnus Trygvason Eliassen on drums, and they continued to perform as a group afterwards, including at the Reykjavik Jazz Festival and then representing Iceland in The Young Nordic Jazz Comets in Copenhagen. They won the latter competition and recorded their first album "The K Trio", which I purchased on my last visit in 2011. Thus, on this visit I picked up the two suceeding CDs, one with the same unit and the last in 2013 with Pat Cleaver of the U.K. on bass and Andris Buikis of Latvia on drums.

The K-Trio is very high on my list of favorites, playing an infectous brand of acoustic jazz using largely simple structures and upbeat melodies mixed with some outrageously beautiful introspective tunes. But the overwhelming feeling is of a group having fun together and working as equal partners in the conception and delivery of these songs. Some songs are seriously lovely and others are bouncy and streaked with humor -- after all, with songs named "Meatball Evening" and "Dunkin' Donuts" how could they not be having a ball. I am very high on these CDs and hope you get a chance to hear them yourselves.

Joel Palsson, "Varp" (Flugur 2006) and "Horn" (Flugur 2010): I missed out on Palsson, a tenor sax player, on my last visit. This time through the courtesy of the store 12 Tromar I sat and listened to significant portions of each and enjoyed the music. "Varp" is far more in your face music than most of what I heard and purchased (including "Horn"), with a definite leaning towards jazz-rock and even some definite thrash at times from the electric guitar and bass. But make no mistake, this is jazz not rock and Palsson is a very good tenor player. His partners on "Varp" are David Por (actually Thor) Jonsson on organ, piano and moog; Hilmar Jensson on guitars; Valdimar Sigurjonsson on basses; and Matthias Hemstock on drums and drum machine.  "Varp" starts with a quiet tune but shifts into overdrive thereafter, and is definitely geared to those favoring an electric jazz-rock mix. Through it all, Palsson does demonstrate great technique and range on his tenor, which is clearer on "Horn", the next CD. "Horn" has a different mix of instruments, with Palsson's tenor joined by Ari Braggi Karlsson on trumpet and flugelhorn, Eypor Gunnarsson on piano and Rhodes, David Por Jonsson  on organ and moog and bass or baritone sax, and Einar Scheving on frums. This group is much more of a traditional jazz quintet and the music reflects that. On "Horn" the music is still upbeat and driven but the undercurrent of electronics and moog is more subdued, less in your face. The opening piece features a very dynamic trumpet part and strong drumming, and is far more of a modern bop piece than anything else. The quintet works well together sharing the leads. "Frahvorf" is a quiet tune unlike anything on "Varp" and starts with some nice rhodes/drum/bass work until the trumpet comes in with a gentle flowing tune which builds as the whole band comes in. Tunes vary from ballads to uptempo blows by the band, and with the exception of a strange "Pigs in Space", the set holds together nicely as modern mainstream jazz. This is the CD to start with unless you are into thrash.

Gunnar Gunnarsson "Hrim" (Dimma 2008): Last visit I purchased "Gnott" (Dimma 2010) and "Hum" (Dimma 2005) and was entranced by this marvelous pianist and his trio. So this time I bought "Hrim", with Gunnarsson playing duets with one of three bass players --- Tomas Einarsson, Jon Rafnsson, or Gunnar Hrafnsson. Once again gorgeous music.

Gunnar Gunnarsson began his music studies in the town of Akureyri in the North, and later completed a cantoral degree from the Icelandic National Church Music School 1988 and a final degree in music theory from The Icelandic Music Academy 1989. He taught music at The Music School of Akureyri for several years, played with various bands, and has been cantor at Laugarnes Church in Reykjavik since 1995. His music reflects this background and is based in Icealndic folk music, hymns, classical music, and jazz. It is chamber jazz of the highest order -- romantic, alluring, lyrical, calm and poetic. He plays with simple melodies, quiet, and moderation, and each tune flows beautifully as does the set. Each bass player is equally distinctive in playing counterpoint melodies, keeping time, or taking solos. This is music that will please the ears of ECM fans, 16 little gems. All three CDs from Gunnarsoon are wonderful and worth purchasing. 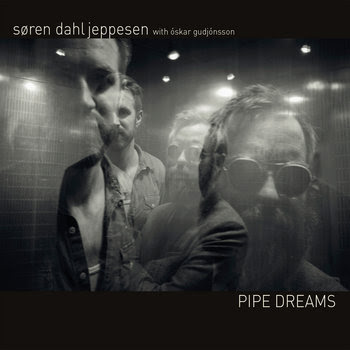 Soren Dahl Jeppesen, with Oskar Gudjonsson, "Pipe Dreams" (Dog Day Music 2013): This is a quintet playing quiet chamber jazz, led by Jeppsen, a Dane, on guitar and Gudjonsson on tenor sax. The others are Klaus Norgaard on bass, Jakob Hoyer on drums, and Simon Toldam on piano, all Danes. (Dare I say that this band has one Icelander and a bunch of great danes?) Anyway, since I bought it in Iceland and it has one Icelander it can be included in this post. The music is often haunting and soulful, played with a quiet and breathy tenor and delicately plucked guitar notes. The rhythm section mostly provides a quiet bass platform and coloration from the brushes of the drummer, and all in all this is a lyrical convergence of the five instruments. "Fallback", the second tune introduces a bit of a Spanish flavor with the opening guitar lines accompanied by the same underplayed tenor. Really very atmospheric music with a small but lovely palette and modest dynamics. Another one for those who like restraint and quality lyricism. Easy on the ears and wonderfully lush. 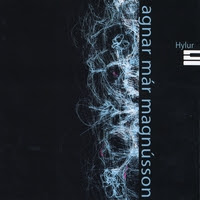 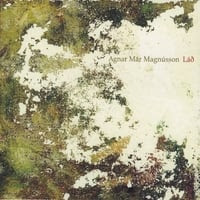 Magnusson began his piano studies at age 6 and jazz studies at agae 16 at the FIH School of Music in Reykjavik, graduating ata age 21 with honors. He then got a degreee in teaching and jazz performance at the Conservatory in Amsterdam, worked with Larry Goldings in New York, and debuted with the CD "01" in 2001. He continues to teach at the FIH in Reykjavik, and to perform in a number of groups. He he is enchanting with his solo performance that rings of folk tunes and his classical training. The music is subtle, gentle, and entrancing, hewing very much to slow deliberation and delicate beauty. This is two CDs of overwhelming beauty but as chamber jazz it leans very far toward the classical palette. The music is never rushed, it never raises its voice -- it simply charms and transports the listener to beautiful places. 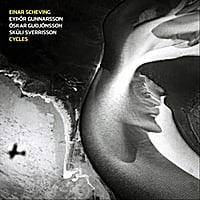 Einar Scheving, "Cycles" (Valrun 2007): Awarded the Best Jazz Album at the 2008 Icelandic Music Awards, this is an album of dreamlike beauty performed by a quartet of familiar names in Icelandic jazz led by drummer Scheving. Eypor Gunnarsson is on piano, Oskar Gudjonsson on tenor, and Skuli Sverisson on electric and bass guitar. Ten sublimely flowing and lyrical songs written by Scheving, everything is nicely rounded and cleanly played. This is another quiet impressionistic and mainstream pice of music on which the tenor sax in particular shines. Scheving is an excellent colorist behind these laid back pieces, and overall this is a very ECM-ish CD that you can get from CD Baby here in the U.S. A nicely done CD of quiet beauty.

Atlantshaf, "Atlantshaf" (Dimma 2006): the word "Atlantshaf" translates as Atlantic, and refers to the Atlantic Ocean, which surrounds Iceland as is a big part of the country's heritage, industry, and lore. This is an Icelandic dream group and includes several players already introduced in this post. Joel Palsson is on tenor sax, Agnar Mar Magnusson on piano, Einar Scheving on drums, and Gunnlaugur Gudmundsson is on bass. Three leaders in Magnusson, Scheving, and Palsson, and the band shows that with its tight play, intricate parts, and creative improvisations. In fact, the CD was the winner of the Icelandic Music Award for Jazz in 2007. This is a nice piece of modern impressionistic jazz, free flowing bordering on the abstract. It's mellow and centered, with a set of soothing and lyrical songs, a lot of piano driven themes but room also for some fine bass solos and the lyrical play of Palsson on sax. Ten exquisite pieces, definitely one to look for.

Finally three quick hits so I can move on to other posts -- this one has sat here for a couple of weeks while I soreted out my problems with the site.

Hot Eskimos, ""Songs From the Top of the World" (JR Music 2011) -- For me this is a piano trio not to be missed, a fun, young and modern group playing some of thier own music as well as some Icelandic pop in the style of groups like Bad Plus, The Tingvall Trio, and other modernists. Lots to like here -- bouncy, catchy tunes, some balladry, and a lot of interweaving of sounds. Karl Olgeirsson on piano, Kristinn Snaer Agnarsson on drums, and Jon Rafnsson on bass make up this terrrific trio.

While I am on fun and funk I need to direct your attention to ADHD and their four CDs, conveniently named "ADHD", "ADHD 2" "ADHD 3", and "ADHD 4". This is another quartet having a lot of fun with jazz, pop, folk, and just about any form of music they can adapt into the group's highly original sound. The quartet is led by David Por Johsson, introduced earlier on the Joel Palsson CDs and here playing organ, piano, synth, bass guitar, or guitar; Oskar Gudjonsson, introduced earlier with Einer Scheving and Soren Dahl Jepesen, on tenor; Magnus Trygbason Eliassen on drums; and Omar Gudjonsson on guitar and bass. Lots of fun, tricky tunes and interesting sonic combinations that are close to the mainstream and yet highly original. Those in Iceland who I spoke with favored the second CD, but all are solid.

Last of the CDs is a more varied set of music by Thorvaldur Thor Thorvaldsson on a self-titled CD -- some songs that sound like fusion, some very mellow sax led songs, some hard edged jazz, and some 60s style blues rock. It's a real interesting melange of songs but each is really well done, again by a familiar cast:  Thorvaldsson on drums, Omar Gudjonsson on guitar, Oskar Gudjonsson on sax, Jon Estes on bass, and Eypor Gunnarsson on piano. More upbeat than most I talked about above, this is a great change of pace fueled by an energetic drummer and guitarist.

Posted by a jazz listener's thoughts at 9:37 AM