With Apologies to Harvie S

I have heard from the wonderful bass player Harvie S and must apologize for incorrectly spelling his name in my end of year countdown post. Here is the corrected record, which I have changed in the original post as well: 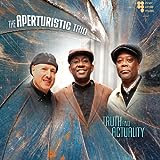 But as long as we are on the subject of Harvie S, let me point out a few more outstanding CDs in my collection:

And those are just recordings in the last decade. In fact Harvie S' recordings as leader go back to 1982 with some under his full name Harvey Swartz, and number in the dozens. Under Harvie Swartz, I encourage you to look for "In a Different Light" (Blue Moon  1990), an early set pairing him with several guitarists including John Scofield, Gene Bertoncini, and Mike Stern.

Posted by a jazz listener's thoughts at 2:00 PM