There are a number of baritone sax players following that exclusive trail on today's jazz scene. Again, this is about those individuals who play baritone exclusively (or just about, as each tends to slip in one or two songs on alternate instruments on a recording) and will not include the many fine players doubling more broadly. The following six musicians are arranged in the order in which they recored their first disc as leader, beginning in 1976 and ending this year with the recent release of Gary Smulyan's "Smul's Paradise" (Capri 2012)

Ronnie Cuber (b 1941) -- Born in Brooklyn, Ronnie Cuber was 32 when he released his first solo outing, "Cuber Libre" (Xanadu records), although he had been a part of the NY jazz scene for a decade by then, in live performancesw with Slide Hampton and Woody Herman's bands, and on recordings by George Benson, Mike Manieri's White Elephant Band,  and Bobby Paunetto's Latin Jazz Projects. In the mid-1970s, he was also in the Saturday Night Live band, demonstrating his virtuosity on the baritone with all types of music, and played behind King Curtis, Aretha Franklin, and in many Latin bands. As a result of his training, his sound  blends straight-ahead jazz, hard bop, soul, R& B, and Latin. His discography includes well over 200 outings. From the 1990s to the present, Mr. Cuber has performed regularly with the Mingus Big Band and recorded several discs for Steeplechase and other labels. His latest recording, "Ronnie" (Steeplechase 2009) is a great set of straight-ahead classics, including music by Richard Rogers, Jerome Kern, Dave Brubeck, Clifford Brown, and others. With a backing trio with Helen Sung on piano, Boris Koslov on bass, and Johnathan Blake on drums, it is an excellent example of Cuber's style, round tone, and harmonic arrangements.

Gary Smulyan ( b. 1956) -- Born on Long Island NY, Smulyan is perhaps the most recognized name today on the baritone saxophone and a master of the fast playing, chromatic bebop style. His music is more agressive than most of the others, with the strong rhythmic propulsion often found in his arrangements most reminiscent of Pepper Adams. Adams' influence is easily recognized in Smulyan's beefy tone and the energy of his rhythmic playing style. Smulyan's "Homage" was recorded following Adams' death in 1994, with each track on the recording written by Adams. A young prodigy, Smulyan sat in with such luminaries as Chet Baker, Lee Konitz and Jimmy Knepper before finishing high school. After college he was a part of Woody Herman's band, and then moved into Manhattan and became part of the Mel Lewis Jazz Orchestra under the direction of Bob Brookmeyer. His first recording as leader came in 1990, "The Lure of Beauty" (Criss Cross), with masters Mulgrew Miller on piano, Ray Drummond on bass, and Kenny Washington on drums. In all of his recordings, Smulyan brings great energy and spirit to the music in a classic, full-bodied bebop style. Smulyan brings to the stage the spirit, style and savvy of a deep-toned master of bebop.

Claire Daly (b. 19??) --  Claire Daly began playing the saxophone at age 12, and according to her biography, "was soon turned onto jazz by way of a visit with her father to a concert that featured Buddy Rich with his big band". The excitement of the night led her to take up the sax in earnest and led to her musical studies at the Berklee College Of Music. She turned professional in the late 1970s and  played tenor sax with both jazz and rock bands. Gradually moving over to jazz full time, she switched to the baritone saxophone.She cites her influences on baritone as Serge Chaloff, Ronnie Cuber and Leo Parker.  In the 1980s she had an extended seat in the all-female big band Diva, and worked with pianist Joel Forrester in People Like Us. She is another of the versitile baritone players like Ronnie Cuber, and moves easily between jazz, R&B and Latin. In 1999 she produced her first CD as a leader, "Swing Low" (Daly Bread), which shows her  to be a gifted improviser with a deep, round tone, and a wide range of emotion in her songs.

Roger Rosenberg (b. 1951) --  A "go-to" baritone for over three decades, Roger Rosenberg studied at Indiana University, and The New England Conservatory of Music. He has worked with a long list of the greats in jazz -- Buddy Rich, Chet Baker, Lee Konitz, Miles Davis, Quincy Jones, Gerry Mulligan, Michael Brecker, Thad Jones and Mel Lewis are just some of the names -- as well as in rhythm and blues, pop, and latin music.  He played on John Lennon's "Double Fantasy"  and Elvis Costello's "North", as well as recordings by Al Green, Laura Nyro, and Barbra Streisand.  His sound is robust and can be both lilting or searing, but is always swinging and melodic. His playing with Chet Baker produced a live album, "Chet Baker Sings, Plays-Live at the Keystone Korner" (High Note Records 2003). Rosenberg released his first CD as leader, "Hang Time", in 2003 (Jazz Key Music)   It mixes standards and originals, highlighted by his boppish ode to John Coltrane called "Trane Dance", and his special take on the old standard "Autumn in New York." His second recording as leader came in 2009, "Baritonality" (Sunnyside), with Peter Bernstein on guitar and Mark Soskin on piano. The lyrical play on "Someone to Watch Over Me" and Spring Can Really Hang You Up the Most" demonstrate what is best about his baritone playing -- the mellow, warmth of the tones really match up with the lyrics and soul of the two songs. Other songs like "Baritonality and "Birds and Trane" capture the more spirited side of the instrument, which sings in Rosenberg's hands. 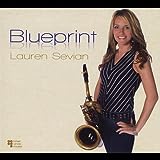 Lauren Sevian (b. 19??) --  According to her  biography, Lauren Sevian has been performing professionally since the age of 12, first on the piano, then on the saxophone, and at an early age won the Count Basie Invitational soloing competition, which led to a feature performance with the Basie Band. In 1997, she came to NYC to attend the Manhattan School of Music, and in her senior year went on tour with the Diva big band. She has been  a regular member of the Mingus Big Band, and has performed with Christian McBride, Terry-Lynn Carrington, George Duke, Billy Harper, and many others. She currently has two quartets, the “LSQ” (bari, piano, bass & drums) & the “Eb Quartet” (bari, alto, bass, & drums). She recorded her first disc as leader in 2008, “Blueprint”, which was a sparkling success and was included in numerous best of the year lists. She wrote all of the straight-ahead compositions, one with co-writer and husband Mike DiRubbo, which are played with exquisite grace and style with her band --- George Colligan on piano, Boris Koslov on bass, and Johnathan Blake on drums. She writes lovely, long fluid lines and plays with a lyricism more reminiscient at times of a tenor sax.

Adam Schroeder (b. 1978) -- Schroeder is the last of these baritones to record as a leader, with the very impressive "A Handful of Stars" (Capri) in 2010. He began his musical training on alto, but changed to baritone by his senior year of high school in Iowa.  He began his college work with Clark Terry at his jazz institute but when it lost its funding he finished at Southwest Texas State University in 2000 with a BM in Jazz Studies. Throughout his career, Adam has had the  opportunity to play and record with a host of jazz greats --  the Clayton-Hamilton Jazz Orchestra, Clark Terry, Anthony Wilson, Ray Charles, Diana Krall, John Pizzarelli, Bennie Wallace,  and Chris Botti, to name a few. He demonstrated a brawny swing style on his CD, which includes a number of standards as well as two self-penned entries. His touch is light and relaxed but still has a full and rich feel to it, and his support is excellent with newcomer Graham Dechter on guitar, John Clayton on bass and Jeff Hamilton on drums.

For more on baritone sax players, go to http://www.jazzbarisax.com/
Posted by a jazz listener's thoughts at 9:17 AM