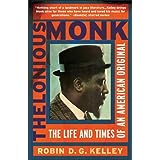 I first discovered the name Ernie Henry when reading "Thelonious Monk: The Life and Times of An American Original" (Robin Kelley, Free Press 2009). Ernie Henry (1926-1957) lived a short life, ended tragically by poor health and his drug addictions, but his alto sax was a significant voice in the mid-1950s, first as a sidman with some outstanding bands, and later as leader on three outstanding records on Riverside (re-released by OJC since).

Ernie Henry was born and raised in Brooklyn, and was one of a group of remarkable youngsters who grew up together in the same neighborhood and became accomplished jazz artists -- friends like Cecil Payne, Max Roach and Randy Weston. He started out learning the violin, but changed to the saxophone by the time he turned eight, and his prodigious talent was clear from the start. Critics have said that if Henry had lived past 31, he would have at least equaled the achievements of his friends. His formative years came during the bebop era and he was discovered by Tadd Dameron, who hired him for his band in 1947. After that group broke up, he got to play in the bands of Fats Navarro, Charlie Ventura, Georgie Auld, Kenny Dorham, Max Roach, and Dizzy Gillespie. He toured with Illinois Jacquet during 1950-1952 and then was out of music for a few years while he battled his health and drug  issues. His return in 1956 led to two years of incredible activity before his drug habit caught up with him once more.

In 1956-57, he played on Thelonious Monk’s "Brilliant Corners" album, worked with Charles Mingus, and produced three discs as a leader (one was released after his death in 1957) as well as an outstanding disc co-led with Kenny Dorham. The scenes of his life in that time period, as described in the Kelley biography of Monk are particularly poignant and saddening, but also speak to the respect for his playing among his peers on the New York scene. I strongly recommend reading the book, not just for this relationship, but for all of the relationships that are described in the book, all of the musicians who crossed paths with Monk, and for the story of Monk's life itself. The book is also a trove of information on some of the finest recordings of the era, and some of the well-known and not so well-remembered players like Henry, Joe Gordon, Elmo Hope, and Richard Twardzik.
As noted, during his final 16 months, Ernie Henry led three albums for Riverside. 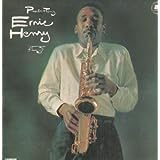 "Presenting Ernie Henry" (Riverside 1956) was the first of his albums as leader, recorded in August 1956.  By the time of this record, it was clear that he had developed a distinctive alto saxophone voice as a player who had absorbed Charlie Parker's lessons without becoming a Parker clone. Teamed with trumpeter Kenny Dorham, Henry justified Thelonious Monk's simple declaration, "He can play." This is a quintet date with  Dorham, pianist Kenny Drew, Wilbur Ware on bass, and Art Taylor on drums. Henry wrote five of the songs, and the other two were covers of  “Gone with the Wind” and “I Should Care.” This is outstanding  music played by five virtuosos. 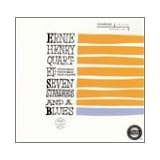 "Seven Standards and a Blues" (Riverside, 1957) -- Recorded just three months before his unexpected death in September 1957, this set is his best showcase since he is the only horn player, backed by a rhythm section of  pianist Wynton Kelly, bassist Wilbur Ware, and drummer Philly Joe Jones. The disc contains some great standards -- "Like Someone in Love", "I Get a Kick Out of You," and  "I've Got the World on a String" are my particular favorites -- along with one song by Henry, a great blues called "Specific Gravity." The playing is superb, with Henry shining and demonstrating his range, burnished tone, and clever improvisations with his strong supporting cast. 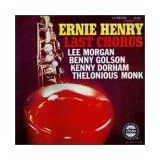 "Last Chorus" (Riverside 1957) was the last of Henry's leader dates to be released, but actually contains some songs recorded at the same time as "Seven Standards and a Blues." The brilliant promise of Henry, which was just blossoming, was dramatically exhibited on this collection of songs. Part of the recording is from an unfinished album featuring Lee Morgan, Benny Golson, Wynton Kelly, Paul Chambers, and Philly Joe Jones. One song, "Like Someone in Love", is an alternate take from the "Seven Standards and a Blues" set, and there are other alternates from two other projects.  Trombonist Melba Liston is featured on "Melba's Tune."  Even pieced together as it is from differnet sessions, the recording holds together fine and provides a number of highlights throughout. 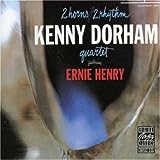 "2 Horns/2 Rhythms" (Riverside, 1957) was trumpeter Kenny Dorham's record, but Ernie Henry had a feature role and was listed as co-leader on the cover. This is Henry's final recording session, on a creative and appealing record. The pianoless quartet also featured Wilbur Ware or Eddie Mathias on bass and G. T. Hogan on drums.  Dorham and  Henry play three of the trumpeter's originals including  a lovely "Lotus Blossom" and four standards highlighted by an exquisite and poignant, given the circumstances to come,  "I'll Be Seeing You."


Any of the four discs are worth having for those who love the jazz of the 50s and these great players. While I have each of the three Ernie Henry discs on OJC recordings, a compliation of the three is available on Fresh Sound New Talent.

Posted by a jazz listener's thoughts at 6:55 PM