Mulgrew is Back and I Am Mad About this CD! 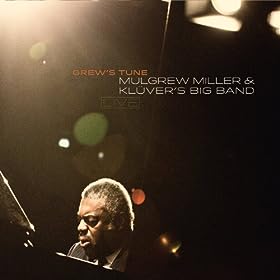 I am a mad Mulgrew Miller fan, with a large collection of his work in trios, solo, and with Wingspan, beginning with "Keys to the City" (Landmark 1985) right through to "Live at the Kennedy Center Volume 2" (MaxJazz 2007). His range on the keyboard, from the Tyneresque structures to the delicacy of his balladry is always impressive, and goes well with his taste in material, from standards to his own compositions.

So I am pleased to see that he has returned to recording once again as guest soloist with Kluver's Big Band on the CD "Grew's Tune" (Stunt 2012), which appeared this past summer to what appears to be little fanfare thus far.

This is a new setting for Miller, and adds yet another dimension to his discography. His trio out front -- himself with Morten Lund on drums and Morten Ramsbal on bass -- is powerful, and supported elegantly by an outstanding band of Danish jazz professionals under the leadership, for the last time before retirement, of Jens Kluver, conductor.

Kluver's Big Band started out in 1977 under the leadership of Jens Klüver. Since his retirement this past year, the band has now become the Aarhus Jazz Orchestra.  The Aarhus Jazz Orchestra is a professional big band with an international artistic level. It is based in Aarhus, Denmark, and has been sponsored by the Danish Arts Council since 1988, which was a great boost to the band’s success. Most of the repertoire is composed and/or arranged for the band, and many are the soloists, composers and arrangers who have provided their singular jazz expression to audiences and band members alike. Musicians like Thad Jones, Clark Terry, Joe Henderson, Abdullah Ibrahim, Dee Dee Bridgewater, Carmen Bradford, Deborah Brown, Lee Konitz, Joe Lovano, Bob Mintzer, Byron Stripling and Kenny Werner have all performed with the band.

Kluver selected six of Miller's compositions and turned the arrangements over to three individuals, and the results are great. Too often soloists get swallowed up by the band behind them, but in this case Miller's trio is clearly front and center with outstanding turns on each piece. "Thinking Out Loud" gets the CD off to a great swinging start, and after Miller there is a wonderful tenor sax solo by Michael Bladt before the entire band swings like mad through the piece. There is no way to pick any single performance out as exceptional -- all of them have great solo features from Miller's trio and others from the band. On "Return Trip", the more mellow second piece, Miller takes the last solo after Jakob Buchanan on trumpet and Claus Waldlaw on tenor. "Samba D'Blue" is next and is a fun romp with a latin beat. Then "Grew's Tune" and "Hand in Hand", and finally there is Miller's lengthy opening solo on the last piece,  "When You Get There". Miller provides an outstanding, bluesy seven minutes of piano viruosity to start it, and it makes a great close to the live concert as the trombone of Stefan Ringrive picks up the same mid-tempo blues with Miller comping behind him, and then Miller returns to take it out with the full band for a rousing finish.

Glad to see that Miller is back on the scene and performing and recording  great stuff. This is a fabulous CD with great variety among the six songs, and those who generally shy away from big bands should have no reservations about adding it to their collection. First rate play all the way around, and plenty of Mulgrew at his best.


Posted by a jazz listener's thoughts at 8:47 AM