Part three of my summary of the piano trios I have purchased in the past couple of months features piano trios that are a bit outside the "standards" trios, but not really very far. These are the CDs that would stretch a straight-ahead listener a bit, but not too much, and I would encourage such a listener to try them. These are what I would term modern creative jazz sets, mixed sets of improvisation and composition, and deconstructions of standards and pop tunes, but always within the framework of an acoustic trio.

It happens that all of the CDs presented here are from overseas, and in fact are all on UK labels. The UK and Europe are at the forefront of a lot of the new modernist trio think, with some groups well-known in the U.S. and others known for the most part only overseas.  Note that in past posts I have written extensive pieces on some of the trios that play music within this context, like Gwilym Simcock, Stefano Bollani,  Helge Lien, John Law, Yaron Herman, and Zoe Rahman among others. This is my small attempt to bring some attention to more of them. 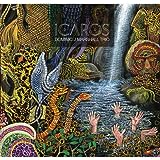 "Icaros" (F-IRE 2012) by the Dominic Marshall Trio is the first of the CDs. It starts right awy with a nice uptempo song, "Loose in Your Atmosphere", that is somewhat the paradigm for the group. It features a bold and lively melody played by pianist Marshall, backed by very upfront play by Kaspars Kurdecko on drums and Tobias Nijboer on bass. It is not a hummable tune but it is a lovely one, and a demonstration of Marshall's talents both as a pianist and composer, as he wrote this and all of the other songs on the disc. The tunes vary among the upbeat and the delicate, so that the opening tune is immediately followed by a very delicate "Pointer." This combination rquires clear interplay among the partners so that they can move easily between the varying tempos and moods, and the three partners do so seamlessly. Great dynamics, great expression.  A first rate creative jazz outing that is easy on the ear and would be a good listen both for those who like to be in the box as well as outside. 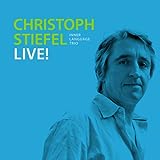 Christoph Stieffel and the Inner Language Trio play a great set on "Live" (Basho 2012). Stiefel is evidently a veteran of the Swiss jazz scene and this is his first wide exposure. He too stresses melody first, built around a concept called "isorhythms", which may sound dull and to me is hard to completely grasp, but won't matter to the listener. What we get here is a CD by a pianist with excellent two handed play, which really creates a great big sound. He is backed by Thomas Lahns on bass and Linel Friedli or Kevin Chesham on drums. "New Waltz for Nina" is a highlight, a lyrical melody that shines, backed by the coloration of the drum set and a quiet pulse from the bass. "Eliane" benefits from the colorations of the high hat, brushes on cymbals, and delicate snares. There is a very contemporary feel to the CD, and a nice mixture of the quiet with the intensity of other tunes like "Pensar Positivo/Isorhythm #18" and "Olympus Mons/Isorhythm # 5." This has the same appeal -- flowing tunes, creative writing of all the songs by the leader, and nice trio interplay. 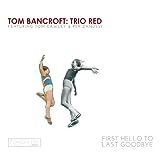 The third entry is "First Hello to Last Goodbye" (Interrupto 2012) by Tom Bancroft: Trio Red. Bancroft is a drummer of Scottish origin with an extensive background who is known for his humor, creativity, and enthusiasm, all of which is brought to bear on this project. He is joined by Tom Cawley on piano, another well-known U.K. veteran and member of The Curios, and Norwegian Per Zanussi on bass. The music combines compositions by Bancroft alongside fully improvised songs and a couple of covers, one of "Opportunity/Lonely Woman by Joan Armatrading and Ornette Coleman and the other Jeff Buckley's "Last Goodbye."  There are fully improvised songs, and songs written by Bancroft or arranged by him but only played for the first time at these sessions, but I cannot really distinguish between them because all are nicely laid out, fluid, and tightly done. The opener is the mash-up of Armatrading and Coleman and it is adventerous and seriously fun to listen to. "Boy Meets Boy Meets Girl Meets Girl" is a humourous tile for a standout song. Mellow, colorful, it builds in intensity through some really nice impressionistic play by the group before it recedes back to a quiet ending. It is intense, enthusiastic, and engrossing. The entire album is the same, a very modern mainstream event where everyone steps up to the plate to deliver a bravura performance, be it the quiet beauty of some or the brash upbeat tempos of the others. And checkout the title "Fukurik", a dig at the U.S. presidential elections and particularly the Republican candidates (or one in particular). Lots of fun and lots of good solid music. 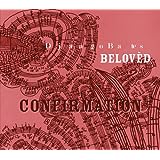 The last recording is by Django Bates Beloved, the second CD by this particular group led by Bates, entitled "Confirmation." (Lost Marble 2012) As he did last with "Bird" (Lost Marble 2010) by the same group, Bates has taken some Charlie Parker songs and deconstructed them to creat some lively recreations for his trio, which includes Peter Eldh on bass and Peter Bruun on drums. On the previous Parker outing the group played seven Parker tunes plus a couple of other covers like "Laura" and "Star Eyes." This time out, there are only three by Parker, six originals, and one forgettable final track "A House is Not a Home" by Burt Bacarach and Hal David with singing by Ashley Slater. Putting aside the last track this is joyful, original, and upbeat throughout. The music is interesting at all times, a bit angular compared to the flowing melodies of the other CDs at times, but also lyrical on songs like "Senza Bitterness." "Confirmation" is upbeat like always but completely new and vital, "Donna Lee" and "Now's the Time" equally so. The music is fascinating and Bates is truly a master of creative composing and improvisation. This is a highlight album to my ear among the pack, and yet any or all of them are terrific.
Posted by a jazz listener's thoughts at 11:47 AM