Until recently I had not heard of Makoto Ozone, which turns out to be my loss. Since then, I have purchased his two latest CDs, "Pure Pleasure for the Piano"(Emarcy 2012) and "My Witch's Blue" (Emarcy 2012). Both are excellent, both mainstream, and both feature some outstanding partners.

First, who is Makoto Ozone? According to his biography, he was born in Kobe, Japan in 1961, and his parents told him he began playing organ at age 2. He came to the piano at age 12 after hearing Oscar Peterson and was hooked. He began playing at jazz festivals while still in high school. At 19, he entered Berklee College of Music (1980) as a jazz arranging and composition major. While gigging in Boston, he met Gary Burton, with whom he has now had a long standing relationship on many CDs, and in 1983 he was signed to a contract with CBS and released his first CD "Makoto Ozone" with all original compositions. He joined the Gary Burton Quartet and played all over the world, and later recorded three more CDs for CBS as well as with the Burton Quartet. In 1989 he returned to Japan and while he recorded several CDs there, none were made available in the U.S.  He has played with some great musicians like Peter Erskine, John Patitucci, Marc Johnson, and Paquito D'Rivera among others; and has 36 recordings as leader since that first recording in 1983.

He recently returned to live in New York, and with these two discs and live appearances I expect he will become more familiar to jazz fans here. But in the meantime, the two new discs are really lovely, similar in both being mainstream, but different in tempos, selections, and overall felling. 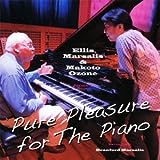 The first one I had was "Pure Pleasure for the Piano", and that is a perfect name for these eight songs. Ozone has a first rate partner on this duo piano outing, Ellis Marsalis, and together they make some lovely, laid back classic sounding recordings of chestnuts like "Emily", "Do You Know What It Means to Miss New Orleans", "Sweet Georgia Brown", and What is This Thing Called Love", along with one song penned by the two gentlemen, one by Ozone, and a couple of others. Everything is played at a mellow tempo, very relaxed, and exceedingly gracefully. When Branford Marsalis joins on the final song "Struttin' With Some Barbecue" the mid-tempo blues really cooks. Delightful stuff, nothing really inventive or suprising, just a really partnership. 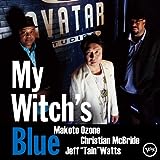 The second CD is more upbeat with more driving tempos being pushed along by the team of Christian McBride and Jeff "Tain" Watts. The first song sets the stage, "Bouncing in My New Shoes" and is a real toe tapper that clearly reflects the title. This is a pure swing session of Ozone's compositions, which will tickle the fancy of those who love hard moving, straight down the middle piano trios. Everyone gets into the action, McBride and Watts deliver the goods, and it sounds like everyone had a good time. Track 9 is a solo improvisation, "Continuum" that shows Ozone's light touch and expressive dynamics at his best, naked to the listener. And once the set is done, the group does its"encore", a great rendition of the classic "Satin Doll." Highly recommended.

Now it's time to go back in the discography and listen to some more of Ozone.
Posted by a jazz listener's thoughts at 10:05 AM