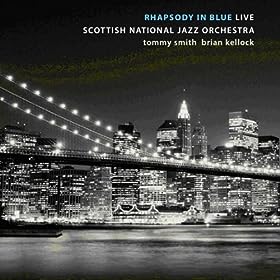 While I was sorting through my collection to pull out the 2013 CDs that I may be listing among the best of the year I pulled out "Rhapsody in Blue Live", Scottish National Jazz Orchestra featuring Tommy Smith and Brian Kellock (Spartacus Records 2009), realizing I had to post about this incredibly imaginative, joyful, 54 minute reworking/arrangement of the Gershwin masterpiece.

Now I have Gershwin's own solo version of "Rhapsody in Blue", the LaBeque sisters' two-handed piano version, Stefano Bollani and Riccardo Chailly's recent ECM outing, the NBC Symphony Orchestra version, and about a dozen others. But with minor variations here and there, these all hew pretty closely to the original score.

Not the Scottish National Orchestra version. It's 54 minutes of pure joy and imagination. It opens up the score to all sorts of changes, retains the key sections but rearranges them, enhances them, re-orchestrates them for different instruments, adds more syncopation, and generally creates a new listening experience that is firmly hitched to the original. No matter what is added, augmented, or improvised upon, one is never too far from the original structure, so that one is always comfortable with the reading. Assuming you can handle not starting with the clarinet glissando!

Had I been writing in 2009 this would have been in my top 10 for sure. Not for the purists of course, but for anyone who loves creative thinking and imagination. It's fantastic.

Posted by a jazz listener's thoughts at 7:12 AM