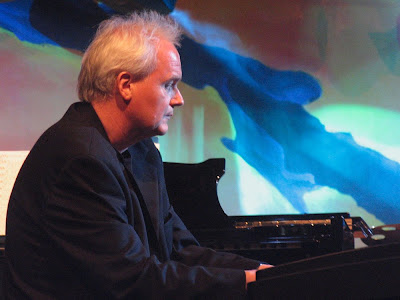 Ketil Bjørnstad is best known in the U.S. for his work with ECM, beginning with "Water Stories" in 1993, right up to the present with "Vinding's Music" in 2012. But Bjornstad has recorded extensively on other European labels, and one of the finest examples of his work that I have listened to is "Floating" (Emarcy/Universal 2006) which, according to his liner notes, was also his first recording in a classic piano-bass-drums trio, with Palle Danielsson and Marilyn Mazur respectively.

Bjornstad was born in 1952 in Oslo, and as a child was trained as a classical pianist. By age 14 he had won the  title of "Youth Piano Master"; by 16,  he debuted as a concert pianist playing Bartok's 3rd piano concerto. He subsequently turned to jazz and played extensively with other Scandanavian players like Terje Rypdal, Arild Andersen, and Jon Christiansen; as well as the American cellist David Darling.

Beginning with his first recording in 1989, he has recorded more than 50 times for labels including ECM, Kirkelig and Universal/Emarcy. His earliest piano work was gathered in 2011 and released as "Early Piano Works" (Hubro 2011) and demonstrates wonderfully his earliest forays into what is commonly called European Chamber Jazz.   Bjørnstad established his international reputation with "Water Stories"  in 1993, and with his duo works with David Darling and Terje Rypdal, also on ECM, in the early 1990s.  His 2010 ECM album, "Remembrance" was another outstanding effort and featured on several songs the tenor saxophone of Tore Brunborg, along with the drums of Jon Christiansen throughout. It was another in a long line of flowing, meditative and serene works that characterize Bjornstad's writing. Bjørnstad is also a writer of words, and has published about 30 books in all, including poems, novels and  biography. His most recent work for ECM is entitled "Vinding's Music", and is tied to his fictional trilogy “To Music”/”The River”/”The Lady In The Valley”.

"Floating", with bassist Danielsson and drmmer Mazur topped the jazz charts in Germany when it was released there in 2006 amd is an exquisite recording. While not an ECM release, it certainly looks, sounds, and feels like one, and the 16 short pieces are an inspired piece of delicate writing. Danielsson and Mazur add depth and subtle rhythmic pulses to the music that floats above so gently and lyrically. The mood matches the title of the CD perfectly, and the creativity of Bjornstad's writing is on display throughout. Danielsson provides a warm,earthy bass, and Mazur's varied and sympathetic percussion provides a rhythmic base as well as soft colorations.  Nothing is rushed, notes are used sparingly to enhance the simple melodies, and  the bass and percussion burnish the sound.  I suppose the title of this music is ambient chamber jazz, or European chamber jazz, but that doesn't matter. What does is the strength of the results, the delicate and introspective playing of Bjornstad, and the enveloping ambiance of the music. This is music that will surround you with its warmth and soul.

If you already enjoy Bjornstad's work, go ahead and buy this. This is music which will melt away the tensions and anxiety of the day.
Posted by a jazz listener's thoughts at 8:46 AM