Look Behind the Leader: An On-going Theme

Once again it is time to look behind the leader's name on the disc to uncover some sterling music. Too often the leader's name is not recognizable and so we skip over the CD to the next one in the rack or on the website or whatever. Sometimes it may be that the leader, while a recognizable name, doesn't lead much and doesn't call out to you like some others might. And too often a really nice CD gets overlooked as a result. Here then are two that I just picked up this week. 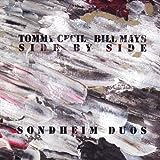 First, a name I had never heard and I doubt most folks outside the D.C. area had, Tommy Cecil, a bassist, on a disc called "Side By Side: Sondheim Duos" (self-produced 2012). It was the name Sondheim that first attracted my attention, followed by a look at the players, of which there are only two -- Cecil on bass and Bill Mays on piano. Now that makes for a tasty treat -- a duo setting of bass and piano, an A-list pianist, and an A-list composer. Turns out the disc is as good as expected -- choice tunes from West Side Story, Sweeney Todd, Follies, Gypsy, among others, and some sweet playing by the two players as they take turns leading and comping, both hewing to the tunes and improvising along the way in a wholly original way. "Somethings Comin" opens the disc with a familiar melody that immediately sets the tone -- brisk, innovative, and melodic throughout, both men shining in their respective roles as the music unfolds easily. Cecil then covers "Not While I'm Around" from Sweeney Todd with a long opening lead under which Mays does some nice things as accompanist before taking over the lead. Mays has a lush solo on "Every Day a Little Death" from A Little Night Music and both knock a rhapsodic version of "Small World" from Gypsy for a loop. Great stuff. 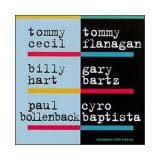 And who is Tommy Cecil? From his bio, Cecil has been a regular on the Washington, DC jazz scene since 1976, and is widely sought out by local players as well as visitors. He has established himself with many of DC’s favorite jazz sons, including John Eaton, Charlie Byrd, Dick Morgan, and Shirley Horn; as as a freelance player with the likes of Mose Allison, Tommy Flanagan, and Joe Henderson. While he has been a sideman on many recordings, this is only one of two CDs as a leader. If piano-bass is a set-up you like, then I suggest you listen to this disc.

On to somebody I have heard of, and who I know as a sideman on a lot of recordings, Lewis Nash. According to Allmusic.com, Nash had only one previous CD as a leader published in the U.S. and that was in 1989, along with two recordings for Pony Canyon, a Japanese label. But he does have in the neighborhood of 200 recordings as a go-to drummer, with the likes of Tommy Flanagan, Sonny Rollins, Clark Terry, Wynton Marsalis, Oscar Peterson, McCoy Tyner, Branford Marsalis, Bud Shank, Scott Hamilton, Jackie McLean, Cyrus Chestnut, and Horace Silver.

So not expecting to see Nash's name up front, it might be easy to pass over "The Highest Mountain" (Cellar Live 2012) at first, and what a mistake that would be. As noted, Nash is a well-respected, well-recorded drummer and first class performer, so you'd expect his band to be of the same caliber, and it is. The quintet features Renee Rosnes on piano, Peter Washington on bass, Jimmy Greene on saxes, and Jeremy Pelt on trumpet. Need I say much more about the music? This is first rate talent featuring leaders who have created some great music themselves recently, and who intuitively know how to play together. Together they do great things with tunes from Bobby Hutcherson, Theloneous Monk, Ornette Coleman, Joe Henderson, and Clifford Jordan, a who's who of hard bop.

Oh, and by the way, Cellar Live has produced some great stuff as well in the past few years, and Cory Weeds is to be commended for his taste as a player, producer, and club owner.

Posted by a jazz listener's thoughts at 10:35 AM