Do You Know Harvie S? 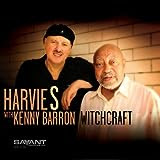 Harvie S (Harvie Swartz), is an accomplished bassist with a long and distinguished career as a leader and accompanist, dating back to the early 1980s. As Harvie Swartz he began his career as leader with a 1982 recording on the Muse label, "Old Time Feeling", a duo with Sheila Jordan, with whom he went on to have a great deal of success. In fact, last year High Note released a 1990 duo recording of the two called "Yesterdays" which I didn't write about but is pure magic. Through 2001, when he shortened his name to Harvie S he recorded almost a dozen sets as leader and was an accompanist playing with, among others, Toots Theilemans, Mark Soskin, John Abercrombie, Joe Locke, and Art Farmer.
As Harvie S, beginning in 2001 he has recorded another half dozen or so CDs for Zoho, Savant and other labels. Highlights include the first duo with Kenny Barron, "Now Was the Time" (Savant 2008) and his first recording on Zoho "New Beginning" (Zoho 2001) a distinctly individualistic melding of bop and Afro-cuban beats.

The latest CD to feature Harvie S as leader is his second duo with Kenny Barron, "Witchcraft"  (Savant 2013), and given the players how can it be anything by elegant, tuneful, and terrific? This will be a pretty short post since there is not much to say other than the two are marvelous together, Barron displays all of those skills he has learned over his 50 years as a professional musician, and Harvie S shows his skills as an accompanist/colorist as well as stepping out on the lead on many occasions and playing a beautifully bowed "Juan's Theme" with some elegant backing by Barron.

Some of the tunes may surprise, like Stevie Wonder's "Creepin' "or Eumir Deodato's "Juan's Theme" but in the hands of these veterans they are as mellow as the rest, which include songs like "Wig Wise" by Duke Ellington, and the title tune "Witchcraft" by Cy Coleman. Barron's tribute to "Sonia Braga" and "Until Tomorrow" by Harvie S feel right at home with the rest.