Get to Know: Laura Dreyer 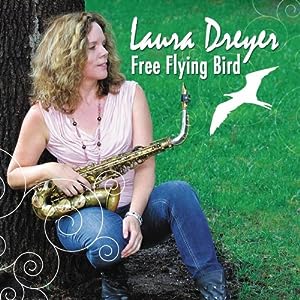 Laura Dreyer's new disc "Free Flying Bird" first came to me over the speakers at J and R Records in Manhattan as I was browsing through the bins looking for interesting finds. I found a few, but the most interesting find of all was Dreyer's disc, with its infectious latin rhythms and outstanding playing.

The cover information in the wrapped package provided nothing further than her picture holding an alto, the titles of her songs  and the fact that she had written all but one of them. The production is by Piloo Records, and Sony Music Latin is also listed as a producer, which clearly defines the overall mood of the music.  No other information told which of the many woodwinds she was playing or if there were others involved, and nothing on the other players.

But just from the energy I heard in the music, the interplay among the players, and the sheer joy the disc radiated I picked up a copy.

The recording starts with a medium tempo alto-led piece, "Free Flying Bird". After a lengthy opening, Dreyer moves into a lovely free flowing section backed by the drums and piano playing tastfully in the background. The alto break leads into a light and lively piano section, again backed by the simple drumming with bass and guitar support. As the piano fades out, the alto re-enters and takes the piece home carrying the melody home.

Dreyer immediately shifts on the second track "The Ouzo Bossa Nova" to the alto flute, a lovely instrument, light and more mellow than the flute, and provides a really nice bossa sound backed by very subtle rhythms from the bass, piano, and drums. The piano interlude is relaxed, played in the middle register with simple single notes and runs, at which point one feels the swaying of the ocean breezes just as the alto flute re-enters with its wonderful, delicate melody. The beat is enforced only by the light tapping of the sticks on the rim and a soft pedal beat, perfect for supporting this light and lifting song.

Another shift and a return to the alto saxaphone for the third song "The Scarab", and then the flute in the fourth "Paixao Louca". Dreyer is clearly a master of many instruments, with a soft polished tone perfect for capturing the relaxed latin mood of the entire project. The rounded alto flute tone is never harsh, the legato notes carry the listener along, and the support from the other players is rendered perfectly -- not over-powering but ever-present to maintain the feel.

A new instrument is introduced on the fifth track, "Palhco", the soprano sax, handled just as nicely as all the others, never harsh despite the higher register sound, always lilting, and beautifully legato, carrying us along on another wonderful melody, this one courtesy of Egberto Gismonti. The track is played at a more languid pace than the preceding pieces, and a gentle cello, violin, and viola backing enhances this more contemplative piece. A lovely interlude with just piano and strings comes near the end.

The remaining four tracks maintain the same feeling, with Dreyer playing the alto sax on two, the soprano sax on one, and the flute on one. All in all a remarkable, mature performance, unified by the consistent tempos, latin beat, and backing of a very nice restrained rhythm section.

So who is Laura Dreyer and who are her bandmates?  According to her biography, she is a native of the San Francisco Bay area, and has been a longtime member of the New York jazz scene. Her compositions fuse elements of jazz, funk and rock with a Brazilian flair, and she succeeds nicely here in creating a contemporary palette with multiple textures. She has played at the Kennedy Center's "Mary Lou Williams Women in Jazz Festival", and has played clubs throughout New York. She has one previous disc "Mysterious Encounter". She has played with a number of latin bands and performed at the Rio 2010 Copafest. She has played alto and tenor, the latter not heard here, with Billy Taylor, Rufus Reid, Walter Bishop and others. She studied at the Berklee College of Music, and was a founding member of the big band DIVA, with whom she played for six years.

As for her bandmates, her supporting cast is outstanding, led by the husband and wife team of Kerry Politzer on piano and George Colligan on drums. George of course is best known as a pianist, but has recorded before on drums behind others including Politzer. Others include Jane Getter on guitar, Zoran Jakovcic on violin and viola, Brina Snow on cello, Klaus Mueller on keyboards, Noah Bless on trombone, and Portinho on drums.

Posted by a jazz listener's thoughts at 7:46 AM