Norma Winstone, who has been called England’s finest jazz vocalist, was born in 1941 and has been recording since the early 1980s, as a leader since
" Somewhere Called Home" on ECM in 1987. Yet she never hit my radar until two individuals gave me a nudge in her direction. So thank you Steve Katai, for all our converations at Sally's and for pointing me to " Stories Yet to Tell". And thanks, too, to Christine Allen of Basho Records for not only reading my blog, but for directing me to Norma Winstone based on my 2011 favorites list. And thanks to Sally White of Sally's Place (Westport, CT) for stocking ""Stories Yet to Tell", "Distances" and Somewhere Called Home." Having a shop like Sally's Place that actually stocks a huge jazz collection is a treasure.
I called this entry "Norma Winstone: Overlooked" simply because I have overlooked her in my meanderings through the jazz world. But then again, I think most folks in the U.S. have probably missed her as well. Granted, vocalists are not at the top of my must hear list, but as my end of 2011 list showed I clearly do listen to them, and in some cases love what I hear. So why did I pass her by time and time again when I clearly had seen her CDs at my local store, and why did I instead try others first? I think there are three reasons:
After listening three of her discs, I am now a huge Norma Winstone fan. Her voice is wonderfully expressive and never overstated or over-wrought, her lyrics have deepened over time, and her interplay with her accompanists is outstanding. Her voice is lovely and soothing to hear and she tells wonderful stories. At times to me her voice was reminiscient of a restrained Barbara Streisand singing a ballad; others have compared her sound to Helen Merrill. This is reflective music, to be taken in and savored.

On the first of the three discs, "Somewhere Called Home" (1987) she is joined by John Taylor on piano, and Tony Coe on clarinet and tenor saxophone. The sound is almost pastoral, as Winstone takes most of the songs at a lovely mid-tempo pace, and the accompanists provide touches of color suitable to the lyrics. Winstone added lyrics to beautiful melodies of some great players -- Egberto Gismonti, Ralph Towner and Kenny Wheeler -- enrichening them and transforming them into a new standard for jazz singers to reach.  Her two standards, Arlen and Mercer's  "Out of This World" and Vincent Youmans' "Tea for Two," are voiced delicately with subtle undertones from her supporting players. Until now I had never heard the latter done as a slow ballad, which really concentrates the listener on the lyrics, and changes what most think of as a simple ditty into a truly lyrical, beautiful ballad. The tenor interlude by Tony Coe is incredibly rich and adds to the overwhelming sentiment behind the song.   Winstone is a wonderful and original interpreter, and her bandmates evince an equally tempered sentiment. There are no vocal gymastics, no great swells and troughs, because none are needed to appreciate this wonderful music and hear each song's sentiment.
The two later discs are equally wonderful, if not deeper in tone and emotion. Her supporting players, feature the bass clarinet played by Klaus Gesing (along with some soprano sax), and the playing of Glauco Venier on piano, with whom Winstone has a long-standing trio dating back some 10 years.

"Distances" (2008) features a wide range of songs  from Cole Porter to Peter Gabriel, a free calypso, a tribute to Coltrane, adaptations of Satie, folk songs, Pasolini and more, all of which flow seamlessly as an extended suite. Winstone’s lyrics are rich with imagery and the sentiments of a older and wiser woman. Words like poignant and lyrical come to mind in describing the set. There is regret in "Here Comes the Flood", irony is "A Song for England", and melancholy in the title song "Distances."  The piano and bass clarinet in A Song for England are especially fun and suited to the song, which begins with two minutes of wordless singing by Winstone followed by some fun lyrics and a calypso beat. Winstone is a wonderful interpreter of the lyrics, and again the music of Vernier and Gesing add just the right touches to each song. From start to finish, this is a truly compelling recording. 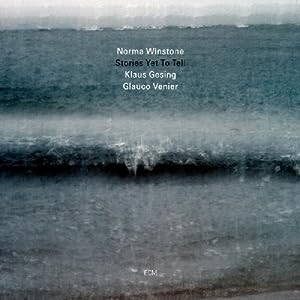 "Stories Yet to Tell" (2010) is Winstone's most recent disc. Winstone the lyricist contributes to eight of its twelve songs. It is clearly the most personal collection to date, and as bewitching as all that came before.  Her  partnership with Venier and Gesing is more fully realized, and the two provide a great deal of support both in the compositions and in their delivery in backing the full richness of Winstone's soft, beautifully realized lyrics. Three of the four songs are instrumentals arranged by Venier, wherein Winstone provides some wordless singing to produce a fully realized trio. When she does sing, her interpretations are once again at the forefront and her lovely, rich, full alto overwhelms the listeners senses with consummate beauty.
Sorry I missed you Norma. I look forward to hearing more from your discography, and to future releases.

Posted by a jazz listener's thoughts at 2:03 PM