Seminal Jazz Players in the UK

Today, I want to begin with a nod to today's edition (Jan 3, 2012) of Marc Myers' JazzWax blog (http://jazzwax.com/) and its feature on  British Jazz.

In keeping with my mission statement in my first blog, I too am interested in bringing to light some of the outstanding players and recordings I have in my collection from the UK, both those of past masters as well as today's stars. I had begun a piece on some of the seminal figures in British jazz, particularly with an emphasis on those masters who are still active on the scene, thus teaching both by example as well as in the classroom.

American listeners have always heard and appreciated British players, for the most part concentrating on those who appeared frequently in the U.S. or are on major labels -- players like those noted in JazzWax, and other current notables like Norma Winstone, Kenny Wheeler, or John Taylor, to name just three who appear on more readily acessible labels like ECM and CamJazz. Some folks will also recognize the name Ronnie Scott, but perhaps as a club owner and location for some great live disks by Johnny Griffin, Ben Webster, Dexter Gordon, and other Americans, and not as a tenor saxophonist. 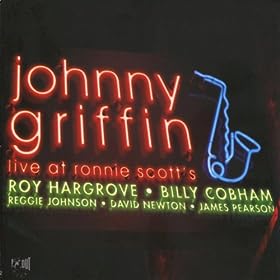 This blog highlights a few players and recordings of those who are not as well known, but have both the talent, discography, and gravitas to measure up as seminal figures to British artists, much as today in the U.S. we have our own octogenarians like Sonny Rollins or Roy Haynes.

Stan Tracey (born 1926) is perhaps the biggest name among those still active today. Tracey is a pianist who began recording in the 1950s and is still active today at age 85, having recorded a Child's Christmas Suite in 2011, a recording that made many of the British top 10 charts for the year. Not only an outstanding pianist, leader and composer, Tracey is also the father of Clark Tracey, a recognized drummer on the British scene, and a respected teacher to many fine young talents (who will be featured in subseqeunt blogs). The five outstanding recordings in my collection of Tracey's work include:

Tubby Hayes (1935-1973) was a true original, a fast playing tenor sax player who unfortunately was here and gone too soon. His stylish melodies and intense improvisations helped introduce hard bop and its new direction to the UK. Here are a few of his outstanding recordings that demonstrate the best of this energetic, freewheeling, and passionate player:
Bobby Wellins (born 1936) is a Scottish tenorist who began his career with Big Bands, including the Tony Crombie Band, which also featured Stan Tracey, among others. Still active today, he began recording in the late 1950s, and on some recordings worked with a young Kenny Wheeler. His work as a leader began in the 1970's and continues today.
Ronnie Scott (1927-1996) was a tenor saxophonist but is far better known as club owner and host of the club that still bears his name today. He too began with the Tony Crombie Band after World War II, played two years in the Jazz Couriers with Tubby Hayes, and in 1959 founded Ronnie Scott's, which he modelled after the Manhattan clubs in which he had played. Generally backed by the house band, Ronnie Scott's was a stop for any American playing in Europe -- Ben Webster, Zoot Sims, Dexter Gordon and others all have recordings from the club. Some selected recordings of Scott worth hearing:
Gordon Beck  (1936 - 2011) Sadly, Beck passed away this fall. His piano work in trios, with vocalists, or in other settings was lovely, with a light touch and expressive tunes and improvisations. His disks are readily available on Art of Life records, and are well worth listening to.

I hope any readers out there will try to listen to some of these British founding fathers, and marvel at their skills and contributions to the jazz scene today. In future blogs, I want to highlight at least two players from the next generation -- Alan Barnes and Dave O'Higgins -- as well as the latest generation of players who have taken the music and run in multiple directions.