Okay, so it wasn't dumpster diving exactly. It was sorting through boxes and boxes of bargain discs at my local record store, which sometimes pays off with little gems. (Anyone like Blake Shelton? I saw at least three of his CDs among the piles.] 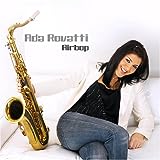 I picked up this CD, "Airbop" (Apria Records 2005) by Ada Rovatti to look at. Why? First, the cover shows her with a tenor sax and I love the sound of a good tenor sax. Second, among the players listed on the back cover two were well known to me as outstanding straight jazz players, Dave Kikoski on piano and Ed Howard on  bass. Good sign -- as I have said on earlier blogs, check the line up if you don't know the name. Good sidemen don't generally play with anyone, and if they think Ada Rovatti is worth playing with then who am I to argue. So then I opened the jewel box to see what it said inside and low and behold, there were guest players, specifically in this case Randy Brecker on trumpet/flugelhorn on four tracks and Bob Mintzer on bass clarinet on one track (and I have already said I am a sucker for bass clarinet).

Now it was really interesting, so I put it on the CD player in the store, and presto, this is a really good piece of solid modern bop music. And Ada Rovatti plays with a really nice big tenor sound. Randy Brecker swings like mad on his four tracks, especially "Choose Your Life", and Mintzer is solid on "2-Bros." with a nice bass clarinet solo. The set consists of 8 pieces composed and arranged by Rovatti, plus one lovely rendering of "My Shining Hour", a Harold Arlen composition on which Rovatti plays a very expressive, smooth soprano sax. Her play here is subdued and lilting, and Kikowski comes in early with a similarly subdued improvised solo that captures the beauty of the song. The  two blow the song away, and demonstrate the virtuosity of Rovatti on a song that everyone knows. Her compositions are effective and great pieces for her playing partners to open up on, and her own mastery of the two saxes on her various solos, runs up and down the notes, and unison play makes this a standout recording. Worth hearing and probably a bargain as well if you look.

Who is Ada Rovatti and what else has she played on? That was my next question after hearing this CD so here are some notes from her on-line biography. Ada Rovatti is an Italian saxophonist from Pavia who began playing piano at an early age and only at the end of high school picked the saxophone as her main instrument. She studied at Berklee College of Music in Boston,  moved to Paris, where she played with many artists, and then returned to New York. She has performed with Les Paul, John McLaughlin, Randy Brecker, Bob Mintzer, Victor Bailey, Miroslav Vitous, Joanne Brackeen, and many others. 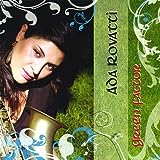 Her first recording as a leader was “Under The Hat”, and “Airbop” is her second release. She also appears on Randy Brecker's “34 th N Lex” (ESC Records 2003) and on John McLaughlin's “Industrial Zen” (Verve Fontana 2006). In 2009 she released “Green Factor”, which I have not heard but is described as a unique recording with a melting pot of irish/celtic/jazz/fusion influences with strong harmonies and sophisticated arrangements. She also has a band, Elephunk, with whom she has recorded as well.

Rovatti is married to Randy Brecker and plays with his quintet.  A review from a recent tour (Jeff Nania, Metroland Newspaper, March 8, 2012) said the following:

Rovatti was endearingly referred to as “the secret weapon” by her husband and bandleader, Brecker. Her tenor sound is often dark and mysterious, but can be soulful and bluesy, or cutting and edgy. This is in contrast to her tone on the soprano, which is round and beautiful without any of the annoying edge that is so often associated with that instrument, and which even more well-known proponents of the instrument fall prey to. The interplay between Brecker and Rovatti came off with ease. They know how to accompany each other, and their interplay is truly conversational. The most original composition of the evening was Rovatti’s tune “Stuntman,” which came to a false ending, and the crowd started applauding before the group went into a 14/8 groove. Rovatti played soprano on this one, and although Brecker played the melody on trumpet, he picked up the flugelhorn for the solo.

[NOTE: There are an awful lot of husband and wife jazz teams around that play some awesome music in addition to these two. Off the top of my head,  I can quickly think of Renee Rosnes and Bill Charlap, George Colligan and Kerry Politzer (Jan 9), Mike DeRubbo and Lauren Sevian (Feb 14), Geri Allen and Wallace Roney. (The dates indicate a blog post reference.)

Readers are welcome to provide more.
Posted by a jazz listener's thoughts at 11:32 AM