Jacques Schwarz-Bart: A Sax Worth Hearing

Jacques Schwarz-Bart has been a mysterious player for me for a while. A player with about a half dozen CDs issued on European labels as a leader, and a host of credits as a sideman, including for Jackie Terrasson and Ari Hoenig on CDs I had never really heard enough of his music to get a feel for his play. However, I was able to pick up his latest CD in Europe, "The Art of Dreaming" (Aztec Musique 2012). In part I did so due to name recognition of Schwarz-Bart and the chance to finally hear him as a leader, but also because I really like his pianist on the outing, Baptiste Trotignon and trusted that that combination, along with Thomas Bramerie on bass and Hans Van Oosterhout on drums (another familiar player) would provide me with some good sounds. 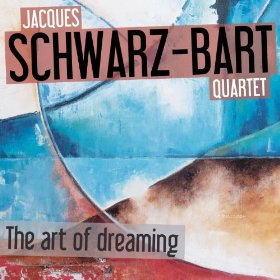 And I am glad to have taken the chance, as this is an outing filled with some powerfully written and improvised, mid-tempo songs that reflect the title and the philosophy of the music. As Schwarz-Bart writes, he was seeking to emulate the philosophy of Carlos Castaneda, to "stay awake with dremaing, in order to travel to paralll worlds and have a better understanding of human potential." Schwarz-Bart compares this to his effort as a musician to dream while awake and playing; his quest is to share his dreams through his music with his playing partners and to transmit them to audience.

And he succeeds quiet nicely with this 10 piece set, composed entirely by himself and his band, partly as written composition and partly as group improvisation, the true expression of the inner thoughts of the musicians. The pieces flow organically from one to the next at mid-tempo speeds, and the effect is to acheive almost the dream-like state of mind the group seeks if one listens in the same way. the group's chemistry is strong and unified, and the concept of leader is blurred by their wornderful contributions. From the opener "Blues Jonjon" and its lyrical groove through the moody "Moods", lyrical "Emile", and delicate "Voir" we are taken on a voyage of outstanding composition, impressionistic dreams, and flowing harmonics that lift the listeners spirits and evoke the dream stae that Schwarz-Bart was seeking.

My understanding is that this will be avialable soon in the U.S. so watch for it. It is a lovely sonic trip.
Posted by a jazz listener's thoughts at 7:50 AM