Four elegant pianists have blessed us with three wonderful recordings in the past couple of weeks, a great way to kick off 2014. 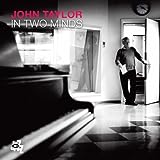 Beginning with the solo recording, the veteran British pianist John Taylor once more has produced a lush, reflective, and refined recording "In Two Minds" (CamJazz 2014). Taylor begins the CD with the self-penned "Ambleside Suite" in three parts, wrote several other pieces, and uses two by Kenny Wheeler, a similarly minded trumpeter, and "Reflections in D" by Duke Ellington. I've written before about Taylor (4/11/13, 5/29/12 and others), not only as a leader but also on works by John Surman, Anders Jormin, Wheeler, Charlie Haden, and Peter Erskine to name a few. The music is the definition of elegance, with lush melodies and harmonies, and mixes his classical and jazz instincts effortlessly. Another first rate outing for Taylor. 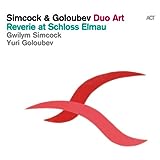 Next a duo, Gwilym Simcock and Yuri Goloubev, on piano and bass respectively, on "Duo Art: Reverie at Schloss Elmau" (ACT 2014). Simcock is a personal favorite, another British pianist mixing classical and jazz training. I have written extensively on Simcock in the past including a posting on his discography in  January 2012, and later about his solo outing on this same piano at Schloss Elmau. The sound from this setting on this and other recordings is wonderfully rich and adds to the aural experience on these pieces written by the two artists. Once again the mixture of classicism and jazz stands out on this wonderful recording. 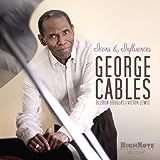 Next up, is a trio recording in a more traditional mainstream mode, George Cables "Icons and Influences" (High Note 2014). His partners here are Dezron Douglas on bass and Victor Lewis on drums. The title says it all -- this is a songbook dedicated to those who Cables looked up to and who influenced his playing and conception of the music. there's "Cedar Walton", the title of the first piece, featuring tight synchronicity among the players, a nice uptempo opener that speaks to both pianist's roles as leader and sideman through the years. Then there is a beautiful, heartfelt elegy for Mulgrew Miller " Farewell Mulgrew", tips of the hat to Duke Ellington, Bill Evans and Benny Golson through use of their tunes, in all twelve mainstream compositions from the heart. It's a great trip through Cables' jazz influences, a lovely set of songs that demonstrate Cables' sensitivity and grace at the keyboard.

Finally, there is Edward Simon "Venezuelan Suite" (Sunnyside 2014) which excels as it extends the reach of Simon's music from his previous outings. This a new direction for the accomplished pianist who as a leader and as a member of the SFJazz Collective has already had a long string of excellent CDs demonstrating both his facility at the keyboard and his excellence in composition. While the first two recordings above combined jazz and classical music, this CD combines jazz with the rhythms and sounds of Simon's native country, and does so with a larger band with richer tonalities and timbres. Joining Simon are saxophonist Mark Turner,  John Ellis on bass clarinet, drummer Adam Cruz,  Roberto Koch on bass, Marco Granados on flute, Leonardo Granados on maracas, percussionist Luis Quintero and Jorge Glem on cuatro, the string instrument that is Venezuela’s national instrument.  Edmar Castaneda guests on one track on harp. The suite is composed of four tunes named after Venezuelan cities -- Barinas, Caracas, Merida, and Maracaibo; the final piece is "El Diablo Suelto" written by Heraclio Fernandez in 1888 and updated for this performance. The music is expansive, with a range of solos and ensemble sections, catchy beats, lilting melodies, and rich harmonies. The flute and cuatro in particular lend the music a special vibe that enriches the entire program. And Ellis' bass clarinet stands out on "Caracas". It's an enchanting set, a feast for the ears with it variety and pacing, and with the richness of the melodies and interplay among the many voices. Outstanding.
Posted by a jazz listener's thoughts at 4:34 PM