Quick Hits: Four Down the Middle 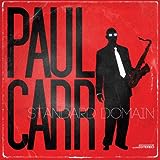 Paul Carr, "Standard Domain" ((PCJ 2012) features the D.C. area tenor sax man with a dynamite crew -- Michael Bowie on bass, Terell Stafford on trumpet, Lewis Nash on drums, and Joey Calderazzo on piano. The group plays the heck out of seven classics and one composition by Carr and another by Calderazzo. Even if you don't know Carr, and I hope many of you do from his previous four CDs, you have to believe that anyone playing with this crew, and formerly with Mulgrew Miller on piano, has to be a player of consummate skills, and he is. The tempos are generally upbeat, Carr burns through the upbeat songs and caresses the ballads. The group provides a high level of improvisation and creativity on such songs as "Cheek to Cheek", "I'm Getting Sentimental Over You" and "Till There Was You". 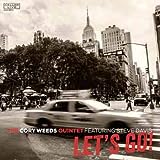 At the end of 2013 came a new one from Cory Weeds "Let's Go" (Cellar Live 2013), another in a long line of excellent jazz CDs from that label and club, and it is good to know that though the club has recently closed Weeds intendeds to keep producing Cellar Live recordings. This one features his tenor sax along with Steve Davis on trombone, Tilden Webb on piano, Ken Lister on bass, and Jesse Cahill on drums. While only Davis may be familiar to many, the other members of the group are long-standing artists from the Northwest U.S. and Canada with a nice record of accomplishment. Together the group fires up with a set of nine songs split between compositions from the group and a couple of covers. This is a recording from the band's tour of the U.S. and Canada and has that live energy and tight feeling one gets from a working band. Great fun that night at Smoke. 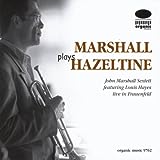 John Marshall Sextett "Marshall Plays Hazeltine" (Organic Music 2013) is another live recording, this from the 2012  "Generations Jazz Festival" in Switzerland. It features Marshall on trumpet, David Hazeltine on piano, Grant Stewart on tenor sax, Johan Horlen on alto sax, Peter Washington on bass, and Louis Hayes on drums. Another group of impeccable players, another set of outstanding music. As advertised, Hazeltine wrote a couple of the compositions, with the remaining numbers including such standards as "I Should Care", What Kind of Fool Am I?", and Monk's "Reflections". John Marshall has a nice quiet, burnished tone which he melds seamlessly with the others, rarely stepping out or showboating, and is supported by some equally rounded play from the saxes. Hayes keeps the group up to speed and adds the right level of excitement to the mix, while Hazeltine as always plays immaculately. First class music. 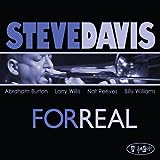 Steve Davis "For Real" (Positone 2014) gets the year off to a great start with eight originals by Davis and one by his pianist, Larry Willis. Besides Willlis and Davis, the players are Abraham Burton on tenor sax, Nat Reeves on bass, and Billy Williams on drums. The quintet lights it up on the imaginative compositions, and Davis continues his long streak of consistently good recordings with this one.
Posted by a jazz listener's thoughts at 12:04 PM