Get to Know: Luis Perdomo

Luis Perdomo is a personal favorite of mine, and his two new discs "Universal Mind" (RKM Music 2012)and "The 'Infancia' Project" (Criss Cross) 2012) just further establish him as a pianist, band leader, and composer to be reckoned with. These two discs build upon his outings as a leader, found on "Pathways" (Criss Cross 2008), "Awareness" (RKM Music 2006) and "Focus Point" (RKM Music 2005). His long list of outings as a sideman includes work with Ravi Coltrane, Miguel Zenon, Steve Turre, Ben Wolfe, Dafnis Prieto, Yosvany Terry, Brian Lynch, and Diego Urcola, among many others. I list these because in each case I have on or more of those outings as well as all of Perdomo's, and in all cases his expressive piano work, his touch and his feel for the music stands out. 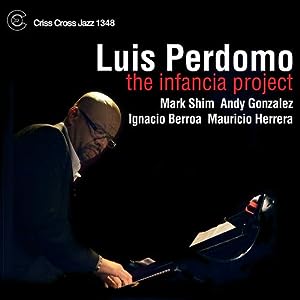 Though Perdomo is from Venezuela his jazz is by no means limited in scope to the genre "latin jazz." In fact, he makes that clear in his liner notes to "The 'Infancia' Project" as follows : [This] is a CD that I had avoided to record for the last 22 years...I always avoided producer' ideas that will end up categorizing me in a certain particular genre, which shall remain unnamed, but based on my background you can figure it out." It is only now after having established himself in the jazz world that he has returned to this music, which brings to the CD the "sounds that I heard as a child growing up in Caracas." Now that he has established his confidence in his playing and his position in the jazz community, it was time to stop denying himself the pleasure of these songs, and to stop denying us of them as well, for the "Infancia Project" is a great CD.

Perdomo has a terrific cast supporting him, Mark Shim on tenor sax, Andy Gonzalez on bass, Ignacio Berroa on drums, and Mauricio Herrara on percussion. The songs are the songs of his youth and of his father's record collection, coupled with four original compositions. Based on the song selection, his father had quite a collection of recordings, as the music features songs by Miles Davis, Ornette Coleman, Bud Powell, and Jack DeJohnette, with only "Comedia" by J.A. Espino being a truly "latin" composition.

Perdomo strikes gold from his own opener, "The Other Left", right through to Jack DeJohnette's "Major General." From the opening piano chords and melody, followed by the entry of the percussion, one immediately knows this will be a lively ride. Shim's tenor excels on the opening piece, and drive underneath between Gonzales, Berroa, and Herrera light a fire under his and Perdomo's lively melodies and improvisations. The group settles in on "Berimvela", another Perdomo piece, with a lovely and lilting mid-tempo melody. The piece opens with the soft round tomes of Shim's sax, backed by some lovely percussive beats. Perdomo plays next on the Fender Rhodes, adding bell like tones to those of Herrera's. What follows next is a highlight performance of Mile's "Solar" started by the synchronized play of the piano and sax, underneath which is a lively percussion section and eventually a standout bass solo with some piano comping and color from the drums. Shim plays an outstanding tenor in the center of the piece. This is a lively latin take on a classic song and a real tour de force for Perdomo's creative arranging.  "Happy House" by Ornette Coleman follows and takes the band to the edge, and then Bud Powell's "Un Poco Loco" is introduced by a strong bass solo by Gonzalez. Perdomo's arrangement then brings in some driving percussion bars, followed by the piano and tenor in unison. "Meggido Girl" is a beautiful ballad piece introduced with some incredibly passionate, legato piano play, backed by only some brushes and light taps of the cymbals. Perdomo has written something timeless in this ballad. The closing tune by DeJohnette sums it all up well -- lively latin beat, some nice tenor work, but nost of all some outstanding, expressive piano play by Perdomo.

Criss Cross puts out some great music regularly, and this is a great addition to their label. Perdomo has written some great tunes and arranaged some others, and gives a great deal of latitude to his band and particularly Mark Shim, who stands out on many of the pieces. 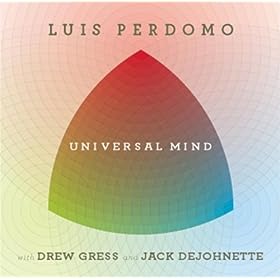 Universal Mind is Perdomo's  fourth release as a leader, in a trio with bassist Drew Gress and drummer LAck DeJohnette, who is having a marvelous 70th birthday year, as exhibited on this and several other 2012 reeleases. Perdomo has a bond with Gress established playing with Ravi Coltrane, and with DeJohnette the two really push this disc to great heights of powerful and beautiful improvisations. Peredomo wrote 8 of the 11 songs, DeJohnette shines with the up-tempo "Rebellious Contemplation," but is also at home with the more open imrovisations of "Unified Path I" and "Unified Path II".  Perdomo is clearly the leader at all times with his melodic sensibiloities, touch, and creativity, with an especially beautiful outing on "Dance of the Elephants." Perdomo is a wonderful improvisor who represents the most creative edge of mainstream jazz. Of the album, Perdomo says “There were no rehearsals. When we got to the studio, we basically started rolling. From the beginning there was a hook-up. It might have been from all the years I’ve been listening to Jack.” No overdubs, no rehearsals, just great music. “The way that you hear it on the record is the way that it was recorded,” says Perdomo. “There are no overdubs; there are no fixings of anything. Everything is just as is."

Perfect. Get it. Listen. Enjoy.

Posted by a jazz listener's thoughts at 3:53 PM