Get to Know: Shai Maestro 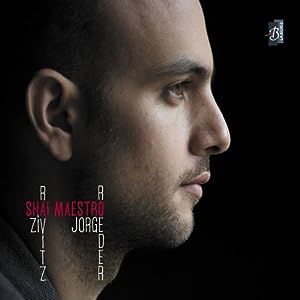 Shai Maestro is likely a new name to most of you who are reading this, although he has supported some fine CDs in the past few years on piano and other keyboards. I first became aware of his playing on such discs as "Song Without Words" by Yuval Cohen, "Opus One' by Shauli Einav, "Carving " by Amos Hoffman (I am a sucker for the Oud), and three by Avashai Cohen (bass) -- "Carving", "Seven Seas", and "Aurora". If you have any of these in your collection, and all are very nice albums, then go back and listen closely to the pianist, who demonstrated on each an unerring ear for comping as well as a great touch and expressiveness on his solos.

By the way, you might notice the pattern here, that each of the discs is led by a prominent Israeli leader, and in fact Maestro is another in that long line of recent stars on that scene and already a well-known name in his native country.

So I was certainly ready for his first outing as a leader, and it has come with the recent release of the eponymously titled trio recording "Shai Maestro, Ziv Ravitz, and Jorge Roeder" (Laborie Records 2012). Ravitz on drums and Roeder on bass are long time trio mates of Maestro, and their sympatico is evident on what to my ears is an outstanding display of expressive and dynamic play. Maestro wrote all but one song here, that exception being a traditional song "Kalimankou Denkou." From the outset one is in the hands of a trio that is lyrical, that flys high when the mood calls for it, and possesses equal parts of dynamism and restraint on the various songs. Maestro writes lovely and lyrical melodies which are interwoven together by the shifting between the three players.

The CD starts out brilliantly with an impassioned "Confession" an opening that resounds with Maestro's dynamic play,  followed by a lovely and delicate centerpiece played by all three members. From that start to the end, the listener is brought into many more such songs of grace and balance;  I was particularly taken by the lyrical "Angelo" midway through the CD but all the pieces are of wonderous appeal and classical beauty. This is one heck of a start as a leader that nobody should miss.

Posted by a jazz listener's thoughts at 7:31 AM