Ek Safar is a trio composed of Nicolas Schulze on piano, Heiner Stilz on clarinet, and Soumitra Paul on tabla, and their new CD is called "One Journey (Double Moon Records 2013). Double Moon is an imprint of Challenge Records of Germany, and this is part of a series labeled as Jazz Thing: Next Generation Volume 45.

The combination of instruments is alluring, hypnotic, and very soothing, even when the tempo is at its fastest and the tabla is in full swing. The songs for the most part were written by one of the group members or as a collective; the exception is "Tabarka" by Keith Jarrett and a couple of traditional songs that were rearranged by the group. 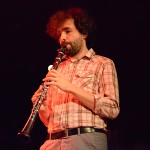 Clarinetist Stilz excells in this setting and brings a subtle eastern flair to the melodies, more so than the piano of Schulze. The first piece, "Listen to the Heart" does begin with a simple chant and some single piano notes for its opening minute or so, and then breaks into a piano and tabla duet that gradually inreases in pace. The tabla is a major element to the piece at first loud and then more restrained as the melody is played by the piano with traditional western harmonies and scales. The clarinet enters at minute five and takes over the melody with a beautiful woody tone and legato tonguing. The tune ends with a reprise of the mild chant as the instruments fade into the background. It's a beautiful beginning to a subtle, gorgeous recording. 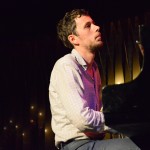 "One Journey", the title piece, is a lovely melody played by the clarinet in its middle register, accompanied by a secondary melody played in counterpoint to it, and the sound has almost more to do with the third stream linkage of classical melodies and jazz than those of eastern music and jazz. "Dialog", the second piece, and later "Dialog 2", are short, sinuous clarinet solos with tabla accompaniment, mostly played in the middle and lower registers. Jarrett's "Tabarka" starts with the clarinet at the forefront with the piano sinuously moving in and around its lead and the tabla setting the pace. Its a marvelous piece for the trio to demonstrate their listening skills as well as their playing skills as they play in and around each other. The tabla plays a major role in the piece and one should listen to Paul as he changes his touch constantly. 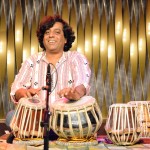 "Schatten Und Begleiterin", or shadow and accompaniment, is a slow, haunting piece played almost mournfully by the clarinet, with the wisp of piano. "Sari Gellin" is a traditional piece which opens with the piano playing simple quarter notes, the tabla setting the beat, and then the clarinet playing a moving solo, followed in turn by the piano. The concluding piece, "Mumbai Mail" is the most distictly Indian song, expectedly as it was arranged from a traditional raga. The three players move in and out, the clarinet provides the sinuous sound of the traditional raga and for the first time plays largely in the upper register though still with restraint. The tabla lays out the tempo throughout, and the piano weaves its way in and out with the clarinet. The tabla solo is a highlight to the piece and really brings home the CD is a very traditional way. A great ending piece.

And so it goes, ten beautiful pieces that provide an air of restrained beauty. All are taken at a mid-tempo at the fastest, and the dynamics never go beyond a mezzo-forte, so the entire set is incredibly soothing with wonderfully woven legato melodies traded between a clarinet hardly ever reaching into its upper register and a piano peacefully rolling out melodies and accompaniment. The tabla is omnipresent but restrained as well.

I am in love with this recording and recommend it across the board to any listener of any jazz persuasion.
Posted by a jazz listener's thoughts at 7:09 AM