Straight Down the Middle, Straight From the Heart

I don't know, sometimes I think it has become quite unfashionable to praise mainstream jazz CDs that cover the standards with with standard band formats. that phrase "moldy fig" rattles around in my brain everytime I pick one up and enjoy it, and think about writing about it.

But then again, that is the beauty of jazz -- so much variety, so many streams -- that there is room under the tent for everyone. Want to know how wide the difference is among listener's (or critics for that matter)? Compare the list of top ten CDs as selected by readers of some of the most widely read jazz magazines, or the lists posted all over by critics.


Variety is what makes it exciting to me every time I read about new recordings, and each time I purchase something new and fresh to my ears. As I hope my posts have shown, I like a wide range of music, from the straight and narrow to some of the edges, although not all of them by any means. One minute it might be Hank Mobley, another Nik Bartsch's Ronin, and another Matthew Shipp, just as example.


I never feel bad about liking or disliking something, (although I did make a promise in January to try and understand better the Sam Rivers "Live in New York" recording because it bothers me not to hear what others love about it, even if in the end I do not). But if I dislike something, I never ever would write what has now become infamous -- "F*ck Wayne Shorter!" I might write that something wasn't for my ears even though I could hear the musicianship, etc. But bad?? I don't write about bad or good musicianship or playing etc since I am not a critic or musicologist. I do write about what I like, what is good for me and why I like it.  Writing that obscenity seems to me the product of jealousy and frustration by a person tired of not getting a share of the attention, and shows an incredible lack of respect. [Ironically I just received a copy monday of a new Frank Basile recording, "Modern Inventions" (CDBaby 2012) on which Alex Hoffman plays, and plays nicely and right down the middle, as part of this mainstream band. It's a nice recording]

For the record, I like a lot of Wayne Shorter's music, but his play at times can be too rough for my taste while at others sublime; and his compositions in his hands or others can be marvelous. This CD does not hit my sweet spot. But that is me, not he and his amazing bandmates.


Anyway, enough of the meandering; I am here today to praise two very straight and narrow CDs I purchased recently by two established saxophonists -- "Baritone Monk" (NCB Jazz 2012) by Claire Daly, and "Touching" (High Note 2013) by Eric Alexander. No new ground is broken but this is music that truly is straight from the heart. On both CDs the sound is special, the individual solos and group play are all good, and each song is played with the appropriate emotional charge.

I've written about Claire Daly before, and her outstanding command of the very difficult baritone sax. As a bass clarinetist I sat next to baritones for years and neither of us ever got near the melody, so to hear a baritone played so flawlessly, emotionally, and smoothly over the course of 10 pieces [Eleven if you count the closing holiday medley with a vocal, which I prefer to forget] by Thelonious Monk is marvelous. Actually nine pieces -- "Pannonica" is as beautiful as ever with Daly shining on the flute in this case as is Steve Hudson on piano. So much joy on other pieces, particularly "Let's Cool One" and "Fifty Second Street Theme", and mystery in the baritone-drum duo on "Green Chimneys." So much to like here. Her supporting cast is lovely -- Hudson on piano, Peter Grant on drums, and Mary Ann McSweeney on bass. 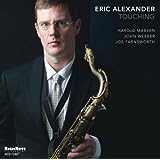 Eric Alexander remarkably has recorded as a leader since 1992, with roughly a disc a year over the past decade on High Note, as well as a number of Japanese ballad recordings. His newest is "Touching", to be released sortly, and it features Alexander wtih three of his regular cast -- Harold Mabern on piano, John Webber on bass, and Joe Farnsworth on drums. On ocassion I have found the recordings overly predictable and just average, but this recording is one of the best I have heard. Over eight songs, many of which are not all that familiar, the band puts their feelings into the music and indelibly marks the tunes with the soul, passion, and musicianship that is needed to lift a mainstream outing up from just a walk in the park into flight. The ballads like "Gone too Soon" are played smoothly and sweetly, and  the R 'n B classic "Oh Girl" is a soulful way to end the recording on an up note. This is a cast that knows each other well and plays like it, matching each other's feelings and notes every step of the way.

For those who love solid mainstream jazz, these are real winners.
Posted by a jazz listener's thoughts at 9:44 AM