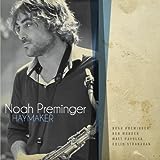 I continue to push out my backlog with  this short post. Noah Preminger is a young tenor sax player who hit a home run with his first major recording "Before the Rain" (Palmetto 2011) which I included as one of my favorites for 2011. I have also inlcuded him in posts as a notable sideman for CDs by The Rob Garcia 4 and Dan Cray. His sound, his expressive play, and his compositional skills impressed me greatly then, and even more so now with his new release. 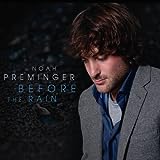 If he hit a home run previously, this time it is a haymaker. And that is the name of the new CD, "Haymaker" (Palmetto 2013), with Preminger on tenor and Ben Monder on guitar, Matt Pavolka on bass, and Colin Stranahan on drums. There are seven originals, six by the leader and one by Monder, and three other songs inlcuding "Tomorrow" from the play "Annie".  Preminger writes beautifully; his compositions are creative modern jazz, somewhere between the mainstream nad the impressionistic styles. The lines are long and lyrical, his tenor controlled whether the sounds called for are mellow or soaring into the upper registers, and the songs interesting if not easily hummable. "Morgantown", an upbeat starter, features a solo drum set midway into the piece that demonstrates Stranahan's capabilities, sandwiched between the modern post bop melody created by Monder. "My Blues for You" is a mid-tempo tune that is supported by Monder playing a counter melody to Preminger's tenor, and the very quiet support of the bass and drums. It's a lovely piece that gives Preminger the chance to display his respect for the tenor tradition with a ripe and round tone and expressive play. Monder gets his chance to demonstrate his chops midway through and creates a really nice, laid back section of his own.

"Haymaker" moves the group a bit off center with a less melodic, more impressionistic opening line from Preminger, which is followed by sections that are more like a tone poem. Once again Preminger displays great control over his instrument as it ranges across the registers and as his emotions range as well between mellow and energetic. Not a song that is hummable but one that is captivating for lovers of modern mainstream jazz.

Skipping ahead, "Tomorrow" is a revelation. Played slowly, the beauty of the melody really shines through. The song has a chance to breathe, as it starts with a solo from Preminger that contains only hints of the melody at first and then slowly coalesces as the rest of the band joins in. It is quite restrained and lovely, this pace allows the group to really bring out the beauty of the tune and longing in the lyrics. Monder plays a lovely little counter melody behind the round clean sound of the tenor.

And so it continues, a nicely paced set that displays the skills of each player. Monder and Preminger play a lovely duet to open "15,000", another mellow and mid tempo original tune and my favorite of the set. After the opening, the piece has some of the most beautiful and soulful play of the set. Both players have outstanding solos that caress the song, and the bass and drum support is capable and restrained in providing the extra punch until the drum gets a solo toward the end of the piece, and even that solo is moderated to fit. "Stir My Soul" follows in the same vein with a quiet, mid-tempo melody played by Preminger with the support of the others. A bass lead for Stranahan, backed by Monder, is a nice little tour de force for the bassist.

When the CD ends with the short "Motif Attractif", which is an absolutely gorgeous little tune played very slowly and quietly with great feeling, one realizes that Preminger has barely scratched the surface of his talents as a player and composer. With this CD he should be stepping into the spotlight, and deservedly so.
Posted by a jazz listener's thoughts at 12:58 PM