Why unusual in the title of this post? Because the lovely, lyrical, and creative music on "Neck of The Woods" (Edition Records 2012), is made by Norwegians Daniel Herskedal on saxophones and Marius Neset on tuba, backed by the Svanholm Singers on a select few tunes.  And it works.  It works so well for me that I included this CD as one of my year's best, in the category of modern lyrical music, which certainly describes it well. It may not be jazz, but it will haunt you when you hear it once, charm you when you hear it twice, and captivate you thereafter. 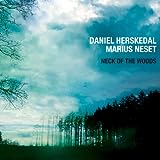 At times moody, at times upbeat, the two musicians demonstrate amazing compatability as they cover 10 of their own songs plus "The Wedding" by Abdullah Ibrahim. I will admit to not being crazy about choral singing on jazz CDs, but in this case the singing is woven completely into the fabric and texture and mood, with the exception of one piece, and is like another musical instrument. And as I said, this may not even be jazz. On the traditional Norwegian song "Eg Er Framand" the soloist is out front for much of the song, and this is in fact my least favorite piece. There is, however, a haunting and plaintive passage in the song with a saxophone melody backed by a moving tuba line. As that part reaches a cresendo the singing resumes to end the piece, and overall this is really effective. Very churchlike and haunting, even if the singing is not quite to my taste.

The rest of the nine pieces are much more interesting to me. Neset is commanding on his various saxophones -- lyrical, mystical, and haunting as needed. Herskedal plays a range of roles, picking up the role of a string bass at times, at times playing counter-melodies, at others playing in unison or leading. The jaunty melody "Asa's Dance" is a case in point: a rolling melody captured nicely in Neset's voice, and a moving tuba part that provides a contrasting melody, a bass voice that in is contrast to the saxophone's higher range, and a strong sense of moving forward at all times. Listen not to the saxophone lead but the tuba part to really get a sense of the two and the intertwining of their roles, which is masterful. The music then goes into "The Christmas Song" which begins with a long and beautiful legato melody by Neset with barely a whisper of anything underneath. Gradually a choral hum begins to support the saxophone melody, and it continually rises but never overwhelm's Neset's play. The wordless support combines with the sax to create a magical and exquisite composition as the tune begins to die away in the end. Next up is "Dragon's Eye", a piece for the tuba to shine right from the opening as it creates a rhythm and texture for the piece. In turn, the next piece, "Introduction to Swan Island" is a haunting solo for the sax, followed by "Swan Island" itself, a piece of great texture and sound that is more about the mix of sounds and mood than the melody as it gradually introduces the voices of the chorale group. Herskedal cleanly and quietly underpins it all with a rolling tuba part. The concluding "The Wedding" is simply masterful.

This is clearly not music for everyone, and is for those who are adventuresome in their listening habits. It is a quiet recording that draws on Nordic folk and classical traditions and may not even be jazz in the traditional sense. The chorale work is woven into the pieces as another instrument, with the exception as noted, and provides texture and color.This a very different and distinct work and a wonderful and enchanting experience.

Posted by a jazz listener's thoughts at 11:26 AM