Great Sounds from the Movies

A musical score is an integral part of the movie director's pallete, setting the mood, forshadowing events, adding to the experience.  But how often do we really listen to the score during the movie, or  purchase a CD to listen afterwards? I am not talking about a dozen or so songs popular songs that are picked to sell CDs, but rather scores that have an integrated set of tracks and are written by a single composer. These days, John Williams is likely the most recognizable of the modern masters, having received his first nomination for an Academy award in 1967 for Valley of the Dolls and having scored Lincoln in 2012; in between he scored  such films as Jaws, Close Encounters, Raiders of the Lost Ark, Schinler's List, and the Harry Potter movies. By the way, Williams is also an accomplished jazz pianist, with a number of recordings both as leader and sideman from the 50s and 60s, sometime as Johnny Williams. 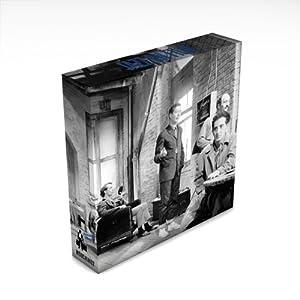 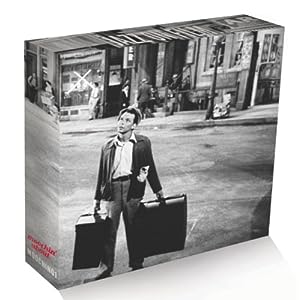 Today there are not a lot of scores written as fully realized jazz pieces, but back in the 40s, 50s, and early 60s there were quite a lot of jazz scores, many written by recognizable composers and players. A British company is releasing some of these scores, packaged in very attractive and interesting box sets, the second of which arrived in my mailbox just last week. Beat, Square & Cool (Moochin’ About). Volume 2 in the series Jazz on Film has scores from eight movies and is a very affordable five CD set. In addition to the music, the box comes with a booklet about the times, and about each movie with details on the players, the composer, and its history/story. Even before you listen to the music you can tell that a lot of dedication went into doing this right, and the remastered music sounds great. The writing is the work of Selwyn Harris, a writer for the British jazz periodical Jazzwise, a magazine of which I have written in the past and encourage jazz followers to read. It can easily be downloaded from iTunes, or purchased at many Barnes and Noble stores (probably others, but that is where I have seen it. I myself read it on my iPad).


These are not all classic films about the hip, the outlaws of the time, or the cool, but they are classic scores.  The scores include The Wild One with music by Leith Stevens; Shadows, a movie by John Cassavetes with a score by Charles Mingus;  Freddie Redd's hard bop score for the film The Connection;  Johnny Mandel's score for I Want To Live; Ellington/Strayhorn's for Paris Blues; Andre Previn's for The Subterraneans; and true highlight, the score from Les Tricheurs featuring JATP players and their compositions --- Stan Getz, Roy Eldrige, Coleman Hawkins, Dizzy Gillespie and others.  The players names in all cases are as recognizable as the composers, a who's who of the time.

This is a gem for jazz buffs, and for those who follow jazz music on film. As I said, it is the second in the set. Volume 1 was Film Noir (with Frank Sinatra on the cover) and was an equally impressive undertaking. Featured on that CD are scores from Elmer Berstein for "The Man with the Golden Arm", and "Anatomy of a Murder" by Duke Ellington, plus scores of other films by Shorty Rogers, Chico Hamilton, and John Lewis. Also worth getting.
Posted by a jazz listener's thoughts at 11:43 AM