A Trio of Piano Trios

From a large pile of recent releases I have three outstanding piano trios to suggest to readers, two by lesser known leaders and one by a long-time leader. What ties them together besides the format is the wonderful quality of the music, the lyricism, and the fact that all three groups are from outsie the U.S. 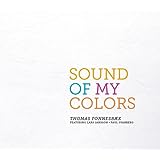 First up is "Sound of My Colors" (Prophone 2012) from Sweden, a trio featuring leader Thomas Fonnesbaek on bass with Lars Jansson on piano and Paul Svanberg on drums. This may sound like a familiar grouping and indeed it is --- Lars Jansson has recorded several outstanding works with the same trio which has been noted here previously. What makes this outing different is Fonnesbaek as leader and composer of 9 of the 12 peices, mixing in one by Jansson and two standards, "Autumn Leaves" and "Summertime". The other difference is the tempo of the songs; unlike the Jansson lead CDs, these tunes are more driven by the beat and framed more by their melodies, rather than the atmospheric tone poetry that one might expect. And the two standards are play luxuriously within that context. All three players get their chances at soloing and demonstrating their firstrate abilities. A great recording that keeps one's interest from start to finish.

Speaking of a luxurious sound and maintaining interest throughout, there is no better piano trio than that of Enrico Pieranunzi, Marc Johnson, and the late Paul Motian. The most recent and presumably last recording by the group is "Live at the Village Vanguard" (CamJazz 2013), recorded during their stay there in July 2010. Pieranunzi is my favorite pianist, playing with such emotional attachment with each piece and with an ear towards his two sympathetic partners on this disc. He plays both within the melody and outside it with some of the most beautiful and creative improvisations around, with a grand imagination that spins beautful stories for the ear.  Johnson and Motian are ideal for his imagination; one only has to listen to Johnson's pairing with Eliane Elias on ECM last year to appreciate his talents and lyricism, and Motian was of course the ultimate conversationalist and colorist on percussion. This is a masterwork of style, beauty and imagination, whether the tunes are originals by Pieranunzi or classics like "My Funny Valentine", "I Mean You" or "La Dolce Vita." Simply gorgeous and not to be missed. 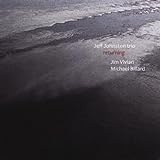 Returning back over the Atlantic from Sweden and Italy, Canadian Jeff Johnston has a trio recording out called "returning" (Jeff Johnston Music 2013) with Jim Vivian on bass and Michael Billard on drums. Don't know much about the group except that they have been together for quite sometime and were Juno Award winners in 2002, but I do know that they are making some lovely, tuneful music together, with seven compositions by Johnston and the standard "As Time Goes By." Each tune is a small gem that at about eight or nine minutes allows the tunes to develop, the improvisations time to breathe, and the teamwork of the players to provide us with a lush and timeless feel. From first to last, the music is endearing and recommended.

Posted by a jazz listener's thoughts at 9:14 AM