Aquarium is Sam Leak on piano, James Allsopp on tenor saxophone and bass clarinet, Calum Gourlay on bass, and Joshua Blackmore on drums. In 2009 they released their debut CD "Aquarium" (Babel 2009) to glowing reviews, and now they have just released their second CD "Places" (Jellymould 2013) which is fantastic and to my ears better even than the first one. 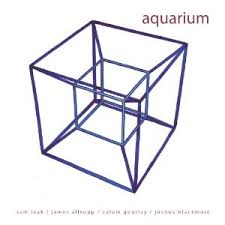 Leak is both the pianist and composer for Aquarium, at at age 26  already has a wonderfully lyrical ear for melody and arranging. He displays a classical sensibility in shaping his melodies, and allows his partners ample space for complex improvisations that spice up the program. Allsopp's tenor sax is tone is wonderfully smooth and almost vibratoless, reminding one of the characteristics of Paul Desmond's alto play. albeit on the tenor and for one lovbely piece on the bass clarinet. His smooth play, coupled with his smooth tone, works well with the soft, lyrical touch of Leak on the piano, and with the modulated percussion and bass play gives the group a chamber jazz touch even as the pieces are more emotive and tempo driven than what one thinks of by that description. The four musicians are finely attunded to each other's notes which results in perfectly balanced, harmonious songs, a tribute to Leak's compositions.

The music begins right away with the lovely notes of Allsopp's tenor, with the title piece "Places" coming right out of the box as a lovely and lyrical work. The piano comps with some lovely fills underneath the legato sax lines, and the quiet but noticable bass and brushwork keep the music moving right along. When the tune shifts to the piano, Leak follows with his own lovely improvisation on the tune. Other places that are noted by the song titles are equally wonderfully played --"Marrakech", Milan" and "Catherine Grove" all feature the same things -- assertive melodies played lyrically, great harmonies, and subtle but noticable contributions by the bass and percussionist. "Milan" is  a bit darker in mood, with a more prominent bass part played on the piano with a heavier touch, but also features perhaps the most beautiful piano solo in the middle of the piece.

My personal favorite  is "February", with its quiet, thoughtful opening by Leak on piano, and then the entry of Allsopp on the bass clarinet, first in its lower register and later in its upper register, but always smooth and mellow to the ear. The movement in the song is noticably driven as well by a quiet yet demanding drum part.

This is a first rate CD that will be high on my list of the best of 2013 at the end of the year. There are no false steps, just eight small masterpieces to the ear.

Posted by a jazz listener's thoughts at 10:25 AM