Look Behind the Leader: An On-Going Theme

I think I last used this blog title in July 2012. Here it goes once more:

Do you know the following names? Dann Zinn, Peter and Will Anderson, or David Caldwell-Mason? Probably not.

How about these names? Taylor Eigsti, Kenny Barron, Ben Wolfe, Kenny Washington, or Ari Hoenig? Those should be more familiar; some are pretty well established veterans, some are newer to the ranks, but each has a pretty long list of accomplishments as  leader or sideman.

So once again, its time for introductions. 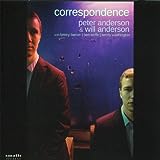 First up, Peter and Will Anderson, brothers and graudates of Julliard whose debut disc is a beauty of straight ahead jazz entitled "Correspondence" (Smalls 2013).  Peter plays tenor sax, Will plays alto sax, and the rest of the band is Kenny Barron on piano, Ben Wolfe on bass, and Kenny Washington on drums. This is a first class, A-One pedigree piano trio/percussion group backing the Andersons, which has to mean something, right? And it does. The two both possess lovely tones, fast fingers, and great emotional range, captured in six originals by the brothers as well as some classics like "Shaw Nuff" from Dizzy Gillespie, "Let's Get Out of Town" by Cole Porter, "Slipped Again" by Thad Jones, and "I'll Keep Loving You" by Bud Powell. And you'll love both the originals and arrangements of the others, which give plenty of time and space for the brothers to stretch out solos, play heads, and interweave their two instruments. Meanwhile the piano trio is supportive, driving the beat, playing interesting fills, and taking some lovely leads. From the first two bars of the title song "Correspondence" you know the two young leaders know their jazz history and their instruments, as they immediately go into a tune that could have been recorded in the 50s. Ballads or upbeat tempos, this is a great debut. And Phil Schaap's notes will add to your pleasure in knowing them. 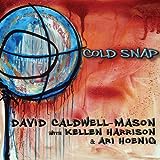 Next up, "Cold Snap" (Self-produced 2013) by David Caldwell-Mason, pianist,with support by Kellen Harrison on bass and Ari Hoenig on drums. Hoenig is the veteran here, a drummer who has led a number of outings as well as a sideman to such players as Kenny Werner, Jean-Michel Pilc, and Ben Wendel, to name just three. Caldwell-Mason wrote six of the eight songs on the CD, which are modern mainstram fare. The opener "Unfold" is a nice, lively song that picks up speed as it progresses and demonstrates Caldwell-Mason's light touch as well as his ear for interesting melodies and turns. Hoenig keeps the rhythm moving ahead with a similarly light touch on the cymbals and high hat and quiet use of the snares. As Caldwell-Mason varies the tempo and dynamics, Hoenig shifts his use to more of the drums, and Harrison comes in and takes a turn in the lead. The CD continues with other similarly balanced tunes among the trio and lively play. "With Fear and Trembling" slows the tempo and quiets the mood as it begins with a gentle rolling piano melody and clear bass support mirroring the piano's notes. It's a nice change of pace on the CD and Caldwell-Mason has a chance to stretch out into quiet and somewhat haunting melody that peaks and recedes several times. Very nicely played throughout, whether it is the simple notes and tune of "Single Ladies"  up next or the larger sounds of "Without Fear and Trembling."  Pick this up if you like piano trios playing modern mainstream tunes. 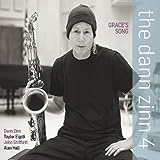 The last of the three CDs caught my attention for the pianist, Taylor Eigsti, who is young but making a name for himself as a leader and sideman, most recently as a sideman on this and on Kendrick Scott's latest (out today) "Conviction" (Concord 2013). I've been a fan of Eigsti's since hearing "Lucky to Be Me" (Concord 2006) and his renditions of "Giant Steps", "True Colors", and particularly his take on the Soprano's theme song "Woke Up this Morning." Here he and John Shifflett on bass and Alan Hall on drums are in support of the tenorist Dann Zinn on "Grace's Song" (Z Music 2012). Zinn composed seven of the nine songs, and included "Stardust" and "King of Pain" (Sting) as the other  two. Zinn ranges widely over his instrument, plays mellow with a bit of vibrato on the opener "Live and Learn" to start and then increasingly edgy/bluesy as the song increases in intensity. He gets to the edge at times, but not over it as he explores and improvises into his upper register in particular. He turns things over to Eigsti in the opener just as he gets to that edge, which provides a nice change of pace as Eigsti proceeds with a bouncy melodic turn. "Western Sky" starts out with an edgy solo tenor part that sounds over-dubbed with a second tenor, and then shifts into a nice straight ahead up-tempo melody that gets everyone involved, with Eigsti once again taking a solo that slows down the growing frenetic pace from Zinn just as it reaches the edge. "Grace's Song" and "King of Pain" by Sting show Zinn's other side, the mellow ballad player, and have really nice Eigsti parts as well. "Grace's Song" features a really nice bass solo part as well.  "Jumpstep" returns to the up-beat tempo, with lots of nice driving rhythm provided by Hall on the drums, and solid piano support including Eigsti's outstanding solo.  "Stardust", the closing tune, is an opportunity for Zinn to once more play it straight and narrow, with less vibrato or bravado, and with quiet support from the others. Its a nice rendition and demonstrates just how skilled the young tenorist is with a standard. Good disc, nice variety, with a bit more edge than the others but still really modern mainstream.

Posted by a jazz listener's thoughts at 2:07 PM