Two new CDs to report on by two veteran tenor players. The first is "Lower East Side" (Posi-Tone 2013) by Ehud Asherie with Harry Allen, and the second "Remembering Billie" (Blue Dutchess 2013) by Scott Hamilton. Both are exactly what you would expect given the players and titles -- classic compositions, smoothly swinging (swung?) sounds, and tight arrangements. Nothing fancy, just meat and potatoes for those who love classic sounds. 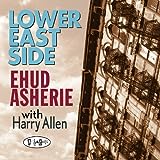 "Lower East Side"  follows on the heels of the duo's collaboration on "Upper West Side" (Posi-Tone 2011) and is strictly a duo -- no bass or drum support -- by two players whose classic sound enriches such songs as "Hey There" by Adler and Ross, "Some Other Time" by Leonard Bernstein, and "Always" by Irving Berlin. Allen has a big, round and luscious sound reminiscent of Ben Webster or of his contemporary Houson Person, and Asherie the touch and love of the classic pianism of the swing era. Together they produce a sound that is wonderfully romantic, nostalgic at times but never stale, and relaxing  to hear. 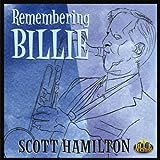 "Remembering Billie" is a tribute to the songs of Billie Holiday, featuring Scott Hamilton with a trio of Tim Ray on piano, Dave Zinno on bass, and Jim Gwinn on drums, none a name I recognized but clearly a capable bunch in support of Hamilton's wonderously large tenor sound. Hamilton's an old pro at taking classic tunes and producing marvellously listenable albums without ever being boring. He is clearly the featured player here, though the others take some nice turns, and Hamilton produces. "Them There Eyes" is taken up-tempo and is fiery and fun, "God Bless the Child" as wonderfully burnished as one would expect, and elsewhere there are nice turns on tunes like "When You're Smiling" and "Good Morning Heartache." Finally, Blue Dutchess is the label of Duke Robillard and he contributes his accoustic guitar play on two tunes -- "Fooling Myself" and "I'll Never be the Same."

Two great straight-ahead albums.
Posted by a jazz listener's thoughts at 8:28 AM