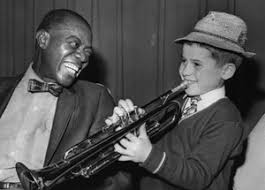 It is said that Enrico Tomasso started playing the trumpet at age five after listening to Louis Armstrong play Basin Street Blues. His father, a well known clarinetist in England, took him to meet many of the American jazz greats when they visited -- including Benny Goodman, Roy Eldridge, Oscar Peterson, Buddy Rich, and Dizzy Gillespie. The most important meeting of all was with Louis Armstrong, for whom he played at age 7 during Louis’ last visits to England in 1968 and 1969. This led to friendship which lasted for the remainder of Louis’ life.

His musical education was fostered by his father, who would transcribe  great trumpeters’ solos, would take him to live gigs, and would provide excellent trumpet teachers for him. Tomasso later went on to study at the Leeds College of Music, and then spent many years working in bands and with visiting Amerian players. Among those he has played with are Scott Hamilton, Ken Peplowski, Bucky Pizzarelli, John Dankworth, and Tommy Whittle and the Pizza Express All Stars. His first recording as a sideman was in 1984, and today he is considered one of the top jazz trumpeters and recently won best trumpet category in the British Jazz Awards. 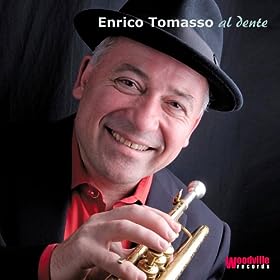 As Tomasso enters his fifties he has finally produced his frist album as leader, "Al Dente" (Woodville Records 2013) and it is a stunning display of maturity, with virtuoso performances on the trumpet and flugelhorn and a wonderful backing piano trio of John Pearce on piano, Andrew Cleyndert on bass, and Bobby Worth on drums.

The CD is full of classic pieces like "Who Cares", "Lullaby in Rhythm", "Rockin' Chair", and "I Got it Bad and That Ain't Good". These songs and others allow Tomasso to demonstrate his range, be it the lyrical flugelhorn he displays on "Gone and Crazy", a Johnny Hodges tune, or the up-tempo swinging "Brotherhood of Man" from the play "How to Succeed in Business" that closes the CD.  "The Good Life", a tune made famous by Tony Bennett, is emotionally charged by Tomasso's burnished tone and lyrical flowing lines.

A really strong mainstream outing by a wonderfully quartet.
Posted by a jazz listener's thoughts at 7:58 AM