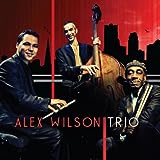 I recently read about this CD,  "Alex Wilson Trio" (AWCD 2013) by the Alex Wilson Trio , purchased it, and I am duly impressed by its energy, its breadth of influences, and its musicianship. It's outstanding.

Looking up some background on Wilson, I found that this is his ninth recording but his first in a piano trio format. Wilson is a native of the U.K. but was raised in Sierra Leone, the UK, Austria and Switzerland. After receiving a degree in Electronics from the University of York, he went on to a career as a jazz pianist and worked with such artists as Courtney Pine, Wynton Marsalis, and Hugh Masekela. His first recording as a leader was Anglo Cubano (Candid Records 1999), followed by two more recordings on Candid -- Afro Saxon in 2001 and R&B Latino in 2002.  He won the Rising Star award at the 2001 BBC Jazz Awards. and has since gone on to record six more CDs on his own label. His international background has sparked his musical interests, and all of his work has a distinct afro-latin base. Besides playing and recording, Wilson is an accomplished producer and arranger as well as an educator in the Department of Music at the University of Nottingham.

As his first piano trio recording, this CD is a new direction for Wilson, but one that still draws heavily on his wide range of musical tastes and experiences. It's an exciting statement of his interests which melds Caribbean, Latin American, and West African music with the Western jazz heritage to create a statement on the universality of jazz.  His partners in the trio are David Mantovani on bass, and  either Frank Tontoh or Tristan Banks on drums (This was a recording taken from two live shows).

The set of nine tunes begins with the uplifting "Fly", a song dedicated to Steve Winwood, who played it on his own recording "Nine Lives." Its a beaqutiful and positive start with its punchy latin beat and major chords. It sparkles with drive and brio, and features some outstanding drumming on the part of Tontoh. "Kalisz" follows and recalls the band's performance at the International Jazz Festival there. It is another solid, driving song that is lifted by a lyrical melody, some bright piano play and a ferocious drum solo. These dscriptions really apply throughout the set, a demonstration of virtuousity by each member. The third piece, "Remercier Les Travailleurs" is derived from a Malian folk melody and is handled with grace and a lighter touch and then builds dramatically to a soaring finish. "Solar", the Miles Davis tune, is taken as a Cuban danzon and is one of the prettiest versions I have heard; it inlcudes a lovely solo part for Mantovani on the bass. Another song from West Africa, in this case Ghana, "Jasmina" is another uplifting celebratory joy, with a solid and pulsing beat driving along a catchy melody. All three members have outstanding solo parts.

Finally, there is one western standard on the CD, "What is this Thing Called Love" and it too is a joy to hear. and a nice finishing piece for the set. In the same vein as the rest of the CD, it is bouncy, cheerful, and driven by a strong and steady beat. The piano part is light and airy and bounces along tunefully, with some outrageously good flights in mid-song. As the CD closer, it provides an outstanding climax to the nine piece set.

This standard piano trio does amazing things with the music, bringing all sorts of influences to play in a very cohesive, straight-ahead performance that is not to be missed. This is one of the more distinctive sounding mainstream trios that I have heard, and certainly one of the most energetic.  An hour of first class music.
Posted by a jazz listener's thoughts at 8:53 AM