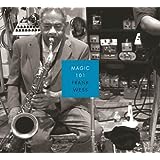 Sublime is the word that comes to mind when I listened to Frank Wess on "Magic 101" (IPO 2013), just released. Seven memorable tunes including "Say it Isn't So", "The Very Thought of You", "Come Rain or Come Shine", seven chances to hear this veteran of seven decades playing so smoothly and comfortably with a swing sound out of the 40s and 50s. At 89 at the time of the recording, music like this doesn't get any better. And no slouches in his band -- Kenny Barron on piano, Kenny Davis on bass, and Winard Harper on drums. Relaxed and unhurried, this is a gem. 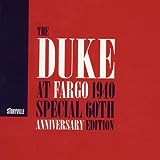 And at the same time I also received Duke Ellington, "The Duke at Fargo 1940: Special 60th Anniversary Edition" (Storyville 2013), another masterwork of 45 live songs on 2 CDs. Recorded with permission by two local amateurs but not for commercial use, the recordings were made with professional portable disc recording equipment using three mikes, and didn't appear until 1976, and now again cleaned and remastered for Storyville. It's a great record of a great band at work, and chronicles them playing their complete sets that night. It gives a real sense of the times, and what magic it must have been in Fargo to have this great band come to town. Some of the names in the band -- Rex Stewart on cornet, Ray Nance on trumpet, Barney Bigard on clarinet and tenor, Johnny Hodges on also and soprano and clarinet, Ben Webster on tenor and clarinet, Harry Carney on baritone and clarinet, Jimmy Blanton on bass, and of course The Duke on piano. Nicely recorded and remarkably clear and balanced, it's a second gem with all the great songs from the band's repetoire. 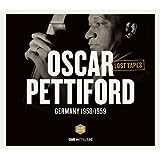 And a third CD for the list of great music by veterans that I have received recently, Oscar Pettiford, "Lost Tapes: Germany 1958/1959 (Jazzhaus 2013), another in a series of recordings that were collected and archived by SWR in Germany and which date back to 1949. Reportedly there are 3000 hours of unpublished music, and to date there have been about a half a dozen "lost tapes" put onto CDs in the past two years. This one is from five dates with mostly European jazz stars and is beautifully recorded. It captures a sound that recalls the period of transition from swing to bebop, and Pettiford's bass and role in that transition. Pettiford's bass play demonstrates the new sound as he takes some great solos, is constantly playing complex measures and walking parts behind the band, and generally shows how the bass player can step out and shine rather than simply being a beat counter. Some swing, a little bop, and some magical movement from his deep and resonant tone on such songs as "But Not for Me", "Yesterdays", and "All the Things You Are" among the 16 tunes here. And a special treat is the beautiful full soprano sax play of the under-appreciated Lucky Thompson heard here on "Sophisticated Lady." Rolf Kuhn's clarinet is another highlight as he and Pettiford play a great duet on "A Smooth One", and as he stays on for another three tunes. Other knockout players include Hans Koller on tenor sax, particularly with a great turn on "O.P.", his own composition, on which Kuhn also shines; and the inestimable Kenny Clarke holding down the drum spot on the final four tunes. Tragically, Pettiford died only a year later in a car accident, leaving everyone to wonder where he would have taken the bass as jazz moved strongly into a new period.

Memories abound with these three recordings which I strongly recommend.
Posted by a jazz listener's thoughts at 9:18 AM