I recently listened to a couple of very nice CDs from Capri Records featuring the piano. 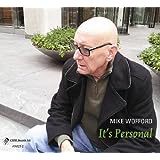 The first is from Mike Wofford, "It's Personal" (Capri 2013), a set of a dozen pieces on solo piano selected for the deep impressions they have made on Wofford over the years.

Wofford is not widely know to the general listening public but should be. Although he has lead a number of sessions for CDs, including several with flautist Holly Hoffman, his wife, he is best known for accompanying some great singers, including Ella Fitzgerald and Sarah Vaughan, and playing with the likes of Benny Carter, James Moody, and Shelly Manne among countless others.

Wofford wrote three of the songs in the set, "It's Personal" for his wife Holly Hoffman; "Cole Porter" in recognition of the songwriter's brilliance with a tune and a lyric; and "Spin" a very catchy tune that has no specific dedication stated. These three pieces demonstrate the taste, style and virtuousity of the pianist, who works largely in the mainstream pocket throughout. With regard to his influences, he has selected the haunting "Little Melonae" by Jackie McLean, an expressive "The Eighth Veil" by Ellington/Strayhorn, "I Waited for You" by Dizzy Gillespie and Gil Fuller that he dedicates to Jimmy Rowles and Ellis Larkins, and three others including compositions by Gigi Gryce, Earl Hines and a fabulous melding of two distinct songs titled "Once in a Lifetime" by Anthony Newly and Talking Heads respectively. 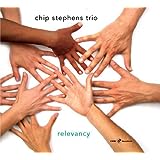 Chip Stephens Trio, "Relevancy" (Capri 2013) is also a very nice, mainstream outing, this time done by a trio including Stephens on piano, Dennis Carroll on bass, and Joel Spencer on drums. Eight pieces here that capture a very high energy band with wide range of tastes. The CD starts right in with the high energy of "Syndrome" by Carla Bley, a wildly fun romp around the keyboard with strong support from the other two members of the band. At times the piano play is quite percussive in the manner of McCoyTyner and Mulgrew Miller, at others lyrical and soaring. A great opener that leads into a more romantic and very pretty reading of "Like Someone in Love" wherein Stephens demonstrates his ability to derive great feeling from the melody and his interpretation and improvisations. "Somewhere Before the End" is a nice blues melody written by Stephens, and "C Hip's Blues" is another by Stephens, a nice uptempo bluesy piece that at ten minutes allows the band to stretch out and play with all sorts of melodies and dynamics.

This is a young group of players that I hope I hear more from in coming years.
Posted by a jazz listener's thoughts at 9:24 AM