I am still having problems with my site and stil cannot use bold, underlining, etc. Again, please bear with me. 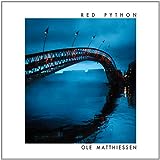 I bought this CD, Ole Matthiessen's "Red Python" (Stunt 2013) on the basis on one name and one name only. And it wasn't Matthiessen or Stunt Records. I bought it because of Adam Nussbaum, the veteran U.S. drummer and friend of Sally White of Sally's Place here in Westport CT. And because I have met Adam and have a number of very good CDs on which he has played. (Folks, try listening to "The Impossible Gentlemen" (Basho 2011) sometime soon to appreciate his play along with Gwilym Simcock on piano and Steve Swallow on bass)

But still I didn't know what to expect, as I have heard Adam on things that would be considered mainstream, outside, inside, and all around the block. I didn't know the players particularly well or the songs. The players are mostly Danes -- besides Matthiessen on piano, they are Henrik Bolberg on trumpet, Denmark-based American Bob Rockwell on tenor sax, Bjarne Roupe on guitar on one piece, and Jesper Lundgaard on bass. I did know Lundgaard from many other CDs to be a well-rounded bassist who played in a variety of styles. And Stunt Records has a reputation for being somewhat outside the box.

So imagine my surprise, amazement, and then pleasure to put on the first cut, "Time to Move On" and find that I am listening to a striaght up, mainstrem, circa 1950s Blue Note Quintet, and a very good one at that. The frontline of Bolberg and Rockwell play nicely in unison and on their individual solos, and the rhythm team comps nicely underneath until each steps out with their own solos. And Adam drives the entire group nicely with his range of sounds and consistent beat without overwhelming the others. On the second piece, "Some Place Under the Sun" Lundgaard impresses with a long and delightful solo, followed by a very mellow Bolberg on trumpet. Bolberg opens the next piece "Pinhole" with another lyrical passage, followed by the full band and then some soloing on the piano and finally a big solo by Nussbaum on the drums. Rockwell shines oon "Theme to and Old Fashioned Girl." On the closing piece "Pulling Through" watch for Nussbaum's enthusiastic solo. And all throughout Rockwell plays with great control, matching his tone appropriately, be it a big round and mellow tone or a more bluesy from the gut feeling.

Every piece is strong, lyrical and easy to listen to. This is a really nice homage to a past era, and a CD that is easily recommended for those who yearn for more of the 50s sound. It's also one that would be easy to pass on if you just looked at the names, the label or even the modern cover. Don't miss it.
Posted by a jazz listener's thoughts at 1:09 PM