Two Oldies But Goodies: The Jazz Giants '58 and Steve Kuhn with Strings 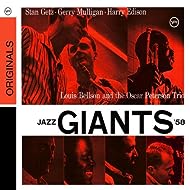 I had never seen "Jazz Giants '58" (Verve2008) and I really am not sure why. What a CD this is, a meeting of giants put together by the inestimable Norman Granz for this one-off. Granz demonstrates here what a truly special prodcer does by putting together a steller cast, renting a studio, and letting them blow. In this case the band Granz assembled was Stan Getz on tenor, Gerry Mulligan on baritone, Harry Edison on trumpet, Louis Bellson on drums, and the Oscar Peterson trio with Peterson of course on piano, Herb Ellis on guitar, and Ray Brown on bass. The head arrangements were done by Mulligan to shape each piece, followed by hard blowing, inventive phrases and flat out bouyant music throughout. Five pieces on the CD, one of which is a fabulous medley of "Lush Life", "Lullaby of the Leaves", "Makin' Whoopee, and "It Never Entered My Mind." "Chocolate Sundae" is the opener, a stand out piece of improvisation attributed to the talents of the front line and Peterson, and the finale is a blowout version of  Dizzy's "Woody 'n You". Fantastic performances. 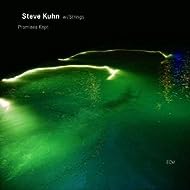 I had seen Steve Kuhn with Strings, "Promises Kept" (ECM 2004) for quite some time, and always passed it by. I almost never like strings with my jazz, although I have made some recent exceptions for the recent releases by Joshua Redman and Ketil Bjornstaad. I too often have found them intrusive to my ears and not particularly well-integrated or adding to my enjoyment -- but  that's me. Anyway, I do love Steve Kuhn's playing, I have countless numbers of CDs by him, and most recently saw him in concert at the Montreal Jazz Festival with Steve Swallow and Joey Baron, where he blew my wife and me away with his lyricism. I also knew that this particular CD was highly praised by reviewers and listeners over the years, so at last I broke down a bought it. It's a great CD, with the piano and strings playing very much as if this was a group playing many small classical piano concertos -- the music is tightly integrated, seamlessly flowing between the players, and incredibly lyrical and moving. Some of Kunh's standout compositions are here like "Pastorale" and "Life's Backward Glance, and Carlos Franzetti has handled the orchestration beautifully, raising both beyond any versions I have previously heard. Kuhn's playing is as wonderful as anything I have heard. Highly recommended for chamber jazz lovers, and for those faint of heart at  the thought of strings.
Posted by a jazz listener's thoughts at 6:58 PM