Enrico Pieranunzi, of whom I wrote in the last post, most likely appeared on the radar screen of a lot of readers, given his long and brilliant career and his recent recordings on CamJazz, which is a label widely available in the U.S. 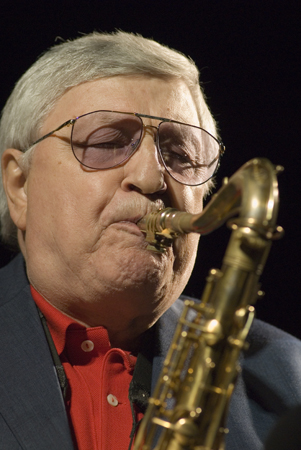 I am really not sure that Gianni Basso, despite a longer tenure on the jazz scene in Italy, has nearly the recognition in the U.S. and perhaps not even in the rest of Europe. He came to my attention via Adam Nussbaum, the accomplished drummer, during a conversation at Sally's Place, as somebody I had to hear, and as I know now, for good reason. Basso is an old school tenor sax player out of the 40s and 50s mold -- a great big round sound, accomplished player of swing and hard bop, and a wonderful balladeer to boot. Think Don Byas, Ben Webster, Dexter Gordon, all of them his contemporaries, and you immediately get the picture.


Born in 1931 in Asti, Italy, his discography as a leader dates from 1960, while his career in jazz began shortly after World War II. He recorded right up until his passing in 2009, and left a long legacy of great music in his wake.  He actually began as a clarinetist playing professionally in Germany and Belgium in the late '40s with the Raoul Falsan Big Band, and then played regularly around Italy in the early 50s. He partnered with a young Italian trumpeter and composer named Oscar Valdambrini and it was their fascination for American jazz that led them to form a small combo that was the rage of Italian jazz in the 1950s. Their popularity in turn got them gigs backing up many touring American stars such as Billy Holiday, Gerry Mulligan, and Chet Baker, and that in turn opened a whole world for him of recordings, beginning in 1960 as the Valambrini-Basso Band, and later as a leader with many other recognized players from around the world.

I have ten of his CDs as a leader, and all are good, with each featuring a different grouping and aspect of his musical personality. In all he has 29 CDs listed as a leader, but many are very hard to get as they are on small or out of print labels. The bulk of my collection is from Philology, one of the outstanding labels in Italy and in fact the jazz world in general. Philology is not a readily available label in the U.S. and coupled with his very few visits, this likely explains why he is under the radar. Several others are from Japan, equally hard to get and often expensive to purchase if you find it. 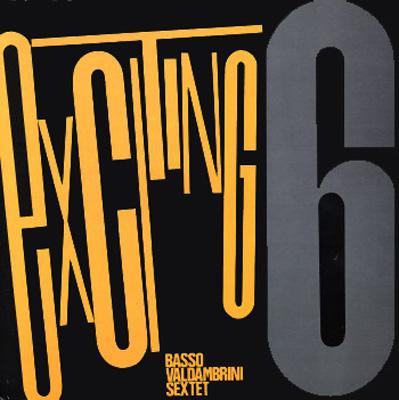 Hopefully a short discussion of each album will suggest what you are missing if you have not heard Basso. I begin with a reprint of a title "Exciting 6" (Easy Beat 1967), featuring Gianni Bass on tenor sax, Oscar Valdambrini on trumpet, Dino Piana on trombone, Renato Sellani on piano, G. Crovetto or Giorgio Azzolini on bass, and Lionello Bionda on drums. Of the group, it is Basso and Sellani who went on to brilliant and very long and distinguished careers.  The CD clearly features songs based on the Jazz Messengers model, as heard at the outset on the opener "Before Ten O'Clock"; and on Horace Silver with some more afro-cuban rhythms like "Look Out" or Guernica"; but it also features many ballads and blues that are clearly original to the band and very nicely played. A lot of potential at an early point in his career, as well as in the career of Sellani, who has some nice solos as well. Nice disc but not essential.

Jumping ahead to 1981, we have a set of four tunes played by Basso and a piano trio as part of the Swiss Radio Days series, which was released as "Swiss Radio Days Volume 24 Gianni Basso and Guy Lafitte" (The Montreux Jazz Label 2010). Lafitte also plays four tunes so there are eight in all on the disc. Basso plays with his lush and rounded sound, and in particular shines on "Groovin' High" and "Lush Life." Again, nice but not essential.

A jump now to 1999 and a really nice disc, "All Those Melodies" (The Montreux Label 1999) again with Basso leading a piano trio. Basso was 68 at the time and his sound, dynamics, expression, and improvisation was peaking. Beautiful renderings of a range of classics like "I'll Walk Alone", "What a Difference a Day Made" and "That Old Feeling" simply bring out the best in Basso as he recaptures the golden sounds of the great tenors of the 50s. This one is worth having if you like solid standards play by a classic sounding tenorman. This is also the disc Adam introduced me to Basso with, and it was a worthy introduction.

Basso hits his stride from 1999 until his passing in 2009, as demonstrated on the next seven recordings.

The next recording is brilliant -- "Two for the Cities" (Philology 2001) and why not -- it is a tenor sax and piano duo of Basso with Renato Sellani, another giant in the Italian jazz pantheon. And of course, one of my favorite settings that I beleive brings out the best in both players. The "gimmick" is that each song is named for a city, so we get glorious renditions of "Do You Know What it Means to Miss New Orleans", "A Foggy Day in London Town" and "Autumn in New York" played to the highest standard possible, along with a number of originals and songs by Italian composers. Just great -- nuanced, expressive music by two pros and timeless music. A surefire winner here to listen to.

Since the previous disc was so good, Sellani and Basso do it again on "Isn't It Romantic" (Philology 2001) with the same results -- a beautiful album played by two masters. This time all twelve songs are classics, from "Nancy With the Laughing Face" to open, to "I Remember Clifford" as the closer. In between are great pairings on "I'll Remember April", Body and Soul", the title song, and "Over the Rainbow" that could make you cry tears of happiness. A glass of wine, a companion, and this is heaven. Only the art on the cover is lousy!

"Blue Woods" (Philology 2002) followed the next year, and takes a different tack, with a quartet of Basso, Andrea Pozza on piano, Luciano Milanese on bass, and Stefano Bagnoli on drums. Enrico Rava makes it a quintet on the finale "Blue Woods", which is earlier played as a quartet. This is the music of Phil Woods as composer, but in Basso's hands the tenor sax changes the dynamics of the pieces, providing a richer tone and deeper voice. Basso caresses the opening ballad "Song for Sass" with the lyricism and sound of the late Ben Webster, the solos on a brisk "Where Do You Go From Here". "Without You" is a lovely and gentle bossa nova. And on it goes -- "The Last Page" suggests Stan Getz,  "Lady J" is a ballad played as a bossa nova, and  "Blue Woods is a stunning blues both with and without Rava. This is a great salute from Basso to Woods.

In 2003 Basso returned to Renato Sellani, this time with Massimo Moriconi on bass and Massimo Manzi on drums, and the result is "I Wish I Knew" (Philology 2007). This is mostly a set of ballads from the Great American Songbook, with Basso's lush tenor complemented beautifully by Sellani's flawless touch. The two are old pals and show it on this CD as they play back and forth with the melodies, harmonies and improvisations without a pause or hitch. "I'll Be Seeing You" is a gorgeous solo outing for Basso, while Sellani lead in to "The Man I Love" which then opens into a swinging rendition. Basso's round and mellow tone is reminiscient once again of the great Ben Webster. Another highlight for Basso.

When the Basso Quartet, with Andrea Pozza, Luciano Milanese, and Stefano Bagnoli meet Enrico Rava, on "Tea for Two" (Philology 2003) sparks fly, fireworks go off, and the result is magnificent. This is the definition of five stars. The set again features standards and include a lovely take of "Bye, Bye Blackbird," a lush and relaxed "All the Things You Are", and an equally relaxed "Do You Know What It Means to Miss New Orleans?" A gem.

The last recordings of Basso are Japanese imports. The first is "Body and Soul" (Venus Records 2008) and is one more duet with Renato Sellani featuring standards. It is a very nice disc and worthy of a collection but is also somewhat duplicative of the earlier Philology recordings. The second, however, is more unusaul, and find Basso teaming with guitarist Irio de Paula on "Recado Bossa Nova" (Pony Canyon 2009). As noted on earlier recordings Basso had included bossa nova and other latin beats, going all the way back to the "Exciting 6" disc in 1967. Here he teams with a guitarist and piano trio, and delivers a set of delightful, charming latin grooves by Antonio Jobim, Sergio Mendes, Kenny Dorham and others. A charming highlight is a bossa rendition of "It Might As Well Be Spring," but it is all great. Bosso's mellow sound blends perfectly with the group and the mood of the songs, and the result is a winner.

So there it is -- ten discs by a marvelous tenor sax player whose influence is felt strongly by the next generation in Italy -- and hopefully enough background to inspire one to go out and listen to his music. For those who love the old Blue Note sound, who loved Ben Webster or Dexter Gordon or Stan Getz, for those like me who love the sax/piano pairing, you really owe youself to listen.

Italian jazz is going to amaze you as we move forward in these posts.
Posted by a jazz listener's thoughts at 5:52 PM