Among my great loves in jazz are Italian players --  Enrico Peranunzi, Paolo Fresu, Enrico Rava, Stephano Bollani, Stephano deAndrea, Fabrizio Bosso, Gianni Basso, Roberto Gatto... the list could go on forever --  and creative piano geniuses, in this case represented by Michel Petrucciani, the French piano wizard with the distinctly Italian-sounding last name. So put the two together and what you get is magic, a lovely new disc by Tommaso Starace entitled "Simply Marvellous -- Celebrating the Music of Michel Petrucciani" (Universal Music Italia 2012). 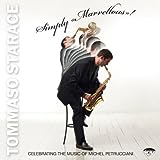 I hope most readers of this blog know Michel Petrucciani as well as his backstory, and have heard at least some of his music on the Owl or Dreyfus label. Briefly, Petrucciani was born in France in 1962 with osteogenesis imperfecta,  a genetic disease that causes brittle bones and, in his case, short stature -- it is often called glass bone disease. This disease caused his bones to fracture over one hundred times until he reached adolescence, and pain remained hroughout his  life. From the beginning, Petrucciani was interested in music and the piano, the latter from seeing Duke Ellington on TV, but his greatest influence was Bill Evans and was reflected in his writing and playing -- layered harmonies, lyrical style, and articulation of melody. Petrucciani gave his first professional concert at the age of 13, having to be carried to and from the piano by his father. Note that despite his size (he could not reach the pedals for example)  his hands were average in length although they too were brittle. By 15, he was playing in Paris with Kenny Clarke and then Clark Terry a year later in his breakthrough performance.  Petrucciani was a difficult person; he compensated for his disability by having an outsized and somewhat immature personality; at the piano he overcompensated at first by playing many more notes than necessary, a trait that diminished as he grew more confident. But in his personal life he acted out and lived life to what he called the extreme for his entire 36 years. 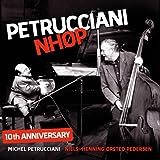 After his breakthrough with Terry, Petrucciani began playing and recording in France with Aldo Romano, but eventually broke away to pursue his dreams in California. While there, he visited the retired saxophonist Charles Lloyd, who truly came out of retirement after hearing Petrucciani play.  “I was here not planning to play again. You triggered me. I heard this beauty in you and I said, 'well I have to take you 'round the world cause there’s something so beautiful, it was like providence calling.”  They began an association that lasted almost a decade, and Petrucciani and Lloyd's performance at the Montreux Jazz Festival was made into an album. In 1982 they won the 1982 Prix d’Excellence. 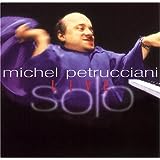 Petrucciani moved to New York City in 1984 and spent the rest of his life there in a maelstrom of creativity and debauched living.  He recorded with Wayne Shorter and Jim Hall, played with Dizzy Gillespie, and recorded several solo piano records.  “I really believe a pianist is not complete until he’s capable of playing by himself. I started doing solo concerts in February 1993...  I had a wonderful time playing alone, and discovering the piano and really studying every night."  In the late 1990s,  he was moving at a frenetic pace musically, playing in excess of 100 concerts a year, and socially as he began to  drink more heavily and experiment with cocaine. He became too weak to use crutches and had to resort to a wheelchair and was carried on and of the stage.

Michel Petrucciani died just after his 36th birthday from a pulmonary infection in 1998.  He left behind a wonderfully diverse set of recordings, on Owl and Dreyfus records for the most part, consisting of solo concerts, trios, and other combinations.

Why dedicate an album to Petrucciani, especially one led by a sax player? Starace in the liner notes says that after programming a few of Michel's songs into his program, the band increasingly found that the energy and passion of Petrucciani's originals inspired the group to greater levels of play. So this is a celebration of his life, his loves, and his incredible positivity in spite of his disabilities. As Petruciani said, "My philosophy is to have a really good time."

Nine of the ten songs are Petrucciani compositions, with the other a Starace original "Marvellous." Starace, an alto and soprano sax player, generally works in Europe and performs here with his Italian Quartet: Michele di Toro, piano, Attilio Zanchi, bass and Tommy Bradascio, drums.  Not only are they a solid working group, but two special guests join them at times and raise the music to even greater heights: Roger Beaujolais on the vibes and Fabrizio Bosso on trumpet and flugelhorn.

The CD lives up to its billing -- the wonderfully lyrical tunes of Petrucciani are played sympathetically, with wonderfully diverse expression and feelings, and a pure mood of happiness.  They are pretty much straght-forward interpretations that hew closely to the objectives of their composer -- rich melody lines, pretty harmonies, and virtuosity from each of the players.

Some of the highlights follow, although every song could be a highlight --- it is that good. The piano/soprano duet on Little Peace in C for You is outstanding, and when the soprano sits out the piano solo is pure heaven; the entire song has a happy, bubbly feel that has to bring a smile to any listener.  My Bebop Tune follows with a brisk romp that showcases Bosso on trumpet. After a brisk unison opening with the sax and trumpet and upbeat piano solo, Bosso plays a burning solo right out of the fifties. Starace picks it up and burns himself on the alto, and then the piano and bass engage in a short romp. Everyone demonstrataes in this single song the chops that are evident throughout. On Guadeloupe, a latin tinged melody,  Bosso and Starace are showcased once more; and Beaujolais provides depth and color to "September Second" and has a great solo on the closing "Cantibile." Watch for more by Di Toro in particular, he is that good here. Bosso has already established a reputation in Eurpose both as a leader and sideman, and has a number of fine discs on European and Japanese labels. 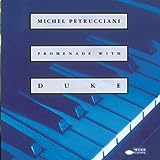 The entire CD is great and pretty much adheres to Petrucciani's rules of life -- live it to the fullest, have fun, and be positive. The music does that emphatically.  Starace says it’s that enjoyment and freedom they feel when they play his music, and they demonstrate that in spades. This is a wonderful celebration of life that should appeal to everyone.

Please search it out, and while you are at it, grab some Petrucciani as well if you don't have any. It will bring a smile to your face!

Posted by a jazz listener's thoughts at 9:18 AM