Behind the Leader: Two Familiar Names

Once again, I want to point out that though a leader's name on a CD may be obscure or at least not well-known to many listeners, often the supporting cast includes some well-know characters. Recently I blogged about a young sax player, Erena Terakubo, a very new name. On her initial CD offering, however, her bandmates were Kenny Barron, Ron Carter, and Dominick Farinacci, all better known players. Similarly, I wrote about a young bassist, Andrea Veneziani, whose first disc is wonderful, and whose partner on it is Kenny Werner, who is certainly well-known.

So let's do it again -- two more CDs you might want to find and listen to. As I was pulling out music to write on shortly -- this time I am going to do a survey of my collection of Italian jazz players -- I came across two non-Italian discs that deserve more exposure. 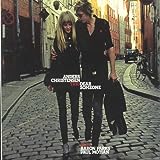 The Anders Christensen Trio, "Dear Someone" (Stunt Records 2008) features Christensen on bass, who is a talented Danish player in the tradition of his countrymates Jesper Lundgaard, Jesper Bodilsen, and Nils-Henning Orsted Pedersen; that is, he is highly melodic, has a strong woody sound, and is an inventive supporting player. NHOP is the player all young Danes try to live up to, and while Christensen does not display the lightening fast play of NHOP, he does maturely provide a strong platform for his mates, and a strong if underplayed groove upon which to build. And it is his band mates that are the well-known players here --- Aaron Parks on piano, who had just debuted on his Blue Note recording "Invisible Cinema" and who today is also linked with the collective group James Farm;  and the master of the drum set himelf, Paul Motian.

What we have here are 10 wonderfully played songs full of great melodies, dynamic interplay and soloing by each player, and the always exquisite colorations of Motian. This is a highly listenable, in the pocket/ down the middle set, but not in the least case boring, old-fashioned or unoriginal. Chrisiansen's solos on "Stompin' at the Savoy" or in the opening "Dear Someone" demonstrate his keen abilities, and Parks as the lead player demonstrates the same abilities and touch that were so widely praised for his "Invisible Cinema" CD. Motian penned three senusous melodies, particularly "Arabesque" that ooze beauty, Christiansen contributes three more and opens one, "The Wedding" with a nice solo lead-in. For me, "I'll Be Seeing You" is a swinging and sentimental highlight.

By the way, the cover appears to be a paean to "The Freewheelin' Bob Dylan," which is a touchstone for many of us from the sixties, and if not intentional, speaks to the nature of this ecclectic outing, which in fact features a title track from Gillian Welch, a country waltz.

All in all, an elegant outing that will appeal to many out there. 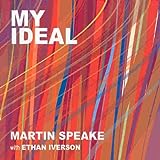 My second CD today is Martin Speake's "My Ideal" (Basho 2002), which I have noted once previously in a discussion of British jazz, but is noteworthy here not just for Speake himself, who is well-known in the U.K. for his large discography but less known in the U.S., although he had a great CD on ECM a while back called "Change of Heart " (ECM 2006) and is a hughly talented saxophonist; but for his accompanying player in this duo outing, Ethan Iverson, of solo fame as well as fame as a co-leader of The Bad Plus (and a very interesting blogger to boot -- read "Do the Math.")

Speake is generally known to be an "in the box" player, while Iverson carries the opposite reputation, most notably given to him based upon the music of The Bad Plus. But Iverson is also a huge talent and ecclectic player who clearly is comfortable in a variety of settings. I have seen him live in a trio at Small's playing pretty stright up but with a lot of flourishes and inventive impovisations, and the "Live at Smalls" disc he is on with Tootie Heath and Ben Street (Smalls Live 2009) is another treat for listeners.

Here is another sax and piano duo, a formation I discussed the other day in a previous post and noted that it is one of my favorite formats. Speake opens with a terrific solo on "Everything Happens to Me". Iverson doesn't enter for the first two plus minutes but when he does he is immediately inventive, and gives the piano quite a workout while Speake in turn sits out.  His rapid, lush play travels across the keyboard, but the underlying melody is always there. Finally the two play together at about the four minute mark, bringing their thoughts together and creating a real "Wow" moment before quitely bringing the song full circle to its denouement. A marvelous beginning to a marvelous CD.

The nine songs include a full range of classics, and each is a gem. "My Ideal" comes second is is a bouncy jaunt; "What is This Thing Called Love" is a classically played ballad with lovely interpretations laid over the foundation of the melody. Iverson comps beautifully and lets Speake lead the melody out, later taking his own turn on this classic. The rest of the tunes are eqully wonderful, and include "So In Love", "Loverman", "Smoke Gets In Your Eyes", "Stardust", "How Insensitive" and "You Must Believe in Spring."

These are standards at their best, played by two virtuosos in the simplest of settings, which gives each room to spread out and create a first rate, must hear CD. No tricks, just beautiful music. Get is from Jazzcds.co.uk -- 5.50  British pounds with shipping ($8.58!!!) -- an incredible bargain that you won't regret.

Posted by a jazz listener's thoughts at 7:55 AM