To my ears, the greatest tenor sax and piano duo was "People Time"by Stan Getz and Kenny Barron. Whether you purchase the two disc highlights or the entire box set of all of the performaces, this is a beautiful pairing of two expressive and sympatico masters at their most creative, even as this was Getz' last recording as he sadly died three months later. 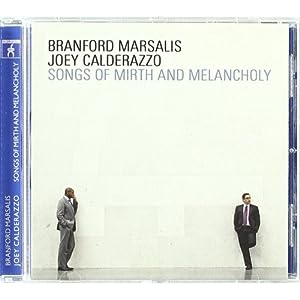 In the past few months I have picked up and enjoyed two tenor sax and piano duos on CD, albeit with very different moods than the Getz/Barron pairing. The earlier of the two has been reviewed by many and was selected by some as one of 2011's outstanding discs. It is  Branford Marsalis and Joey Calderazzo together on "Songs of Mirth and Melancholy" (Marsalis Music 2011). The two have been playing together since 1998, when Calderazzo replace the late Kenny Kirkland in Marsalis' band.

The disc leans toward the melancholy, with haunting moods, lyrical lines and subdued play by both men, particularly Marsalis pulling back on his horns.  The melancholy is encapsulated  in Marsalis'  "The Bard of Lachrymose," with Marsalis on a haunting soprano sax. Calderazzo's "One Way," is one of the few peices expressing the mirth. It is a more swinging, bluesy piece than most, and the conversation between the two friends is upbeat and tied to the old  swing traditions of jazz.  Overall,  "Songs of Mirth and Melancholy" is surprisingly subdued, and while it is an exceptional partnership and expressive CD, the melacholy overwhelms the CD and leaves mirth well into the background. A nice listen and one I would recommend, but remember that it is more subdued than the title suggests.

The newer of the two CDs herin is "Smoke and Mirrors" (kwrecords 2012) by Bobby Wellins and Kate Williams, and this too is a subdued set played by two wonderfully expressive players.

I have written before about Wellins and Williams, as they are major jazz players on the U.K. scene with a long list of accomplishments between them. Wellins is the veteran here, born in Scotland in 1936 and still going strong at age 76. He is a tenorist who began his career with big bands, including the Tony Crombie Band, which also featured Stan Tracey, another seminal U.K. player. Though he began recording in 1950s, he is still very active today, and in 2012 was given the Parliamentary Jazz Award as the Jazz Musician of the Year in the U.K.

Kate Williams plays piano in the tradition of Brad Mehldau, Keith Jarrett, Bobo Stenson and others; that is, with creativity, great touch, and expressive writing. Her recording career began in 2002 and she has a half dozen recordings which include groupings from trio to septet. In past blog posts I have recommended a number of her recordings.

"Smoke and Mirrors" is a duo, as previously noted, but there are no smoke and mirrors in the music, just some simply wonderful accoustic pairings of two talents whose play is highly sympatico.  The two have worked together before in other formats and appear to know each other quite well.
"Smoke And Mirrors", the title song,  is a collaborative piece by both composers/players and sets the mood for the recording, which is subtle, relaxed, and harmonious. The two work easily together trading leads and comping in an effortless way. standard: languid, relaxed interplay between tenor saxophone and piano that has the effortless ease that can only come from players in total command of their craft. Williams' does have a solo on her composition "What If..." and it is a stirring and emotional experience, but the  real fun is in hearing the duo, on either  their own pieces or on a couple of standards. The first of the two is an interpretation of  Jobims's "If You Never Come To Me," with Wellins' tenor warm and romantic; and the second is Gershwin's "The Man I Love", where Williams provides the swinging rhythm for Wellins simple and effective playing of the melody.

This is another example of two players understanding each other and the music, who do not over-embellish the melodies, play with restraint, and provide the listener with a wonderfully laid-back set. The two set the mood from the outset -- langourous and romantic -- and the music glows with their warmth and charm.

Highly recommended and available from jazzcds.co.uk.