Reaching Across the Atlantic -- Some New Discs by Italians

Yesterday I was in New York City for business meetings downtown,  which meant a visit to J and R Records, which still maintains a nice sized jazz section, although clearly a shrinking one. It was noticeable that over the last two years the size of the department has been cut in half, and it appears from conversations that I had with staff that the internet is cutting into the business in a big way, especially among the younger set who are increasingly becoming used to getting their music from the ethers.

But for us oldies who like the tactile feel of a disc (or in reality that of a record/LP (let's not say vinyl please)), J and R is still a great place to browse, as they mix in some European labels in the collection.

I bought a bunch of CDs of course, some of which were fairly standard -- the first Wynton Marsalis called "Wynton Marsalis" (Columbia 1982), which I didn't own, the new Curtis Fuller "Down Home" (Capri 2012), and the debut CD by Rabih Abou-Khalil " Al-Jadida" (Enja 1991). I would recommend any of them.

But what I want to highlight here are the five which fit into my current discussion of Italians and jazz. I have played each already at least twice.  These are discs by the new generation in Italian jazz, and in three cases a collaboration of Italian and Amaerican players.

First up is a duo recording of Fred Hersch with Italian clarinetist Nico Gori, called "Da Vinci" (Bee Jazz 2012) a spritely set of originals by the two players -- 6 by Hersch and 1 by Gori -- with    " Old Devil Moon",  "Tea for Two" and "Doce de Coco". I had not heard of Gori prior to seeing this CD at the store, but then again in the notes Hersch indicates he had not heard of him either until he saw him play at the North Sea Jazz festival in 2010. They were drawn to each others' play and soon began to do some small venues togehter, which culminated in this recording in late 2011 in Udine, Italy. The two play seamlessly and effortlessly throughout, picking up when one leaves off, comping beautifully, or inter-twining melodies as they improvise across each song. The recording is marvelous and both players produce remarkably clean and sensual sounds from their instruments. Hersch opens with some beautiful play on "Old Devil Moon", the two play a wonderfully sensual piece "Hot House Flower" by Hersch, Gori plays a nice old-fashioned clarinet on "Doce De Coco" that is exquisite, and the closer "Tea for Two" sounds incredibly fresh for such an old chestnut. This is an A plus recording that should not get overlooked.

A biography on Nico Gori from his website. He was born in Florence in 1975, and started studying clarinet at the age of 6. He is a 1993 graduate of the Luigi Cherubini Conservatory in Florence1993, and learned from such artists as Dave Liebman and Tony Scott.  He began recoding in 1998 on some pop and jazz discs as a sideman, and since 1999 he has worked with such notables as Stefano Bollani and Enrico Rava. In 2003 he recorded his first jazz album as a leader, “Groovin’ High” (Philology 2003). He has been a member of Stefano Bollani’s New Quintet since 2004, performing in festivals and theatres all over the world, and was on the Stefano Bollani Quintet double CD “I Visionari”(Label Bleu 2005) and has since been on several other Bollani recordings.  Since 2005, Gori has led a quartet of French musicians and has been a member of an Italian-Hungarian Quartet with the well known pianist Kalman Olah. Starting in 2009, Gori started collaborating with trumpeter Tom Harrell and pianist Fred Hersch and recorded an album called “Shadows” (Universal Music 2009) with his quartet featuring Tom Harrell.

Maurizio Minardi is a pianist who is at the start of what should become a long and notable career. His newest recording "My Piano Trio" (Belfagor Label 2012) with Nick Pini on bass and Jason Reeve on drums is a marvelous set of 9 originals by Minardi. The music is lyrical and a wonderful example of contemporary jazz, rooted in the European classical tradition and also the tradition of the great standards players. The pianist crafts wonderfully melodic pieces from various sources -- traditional standards, italian folk music, the baroque, and even pop -- and creates music that is passionate and expressive of the sounds of today. The group thus has a style of its own as it fuses these diverse influences into nine finely played pieces.

Minardi has been based in London since 2008, but is originally from Italy, where he studied piano, organ and composition at the Conservatorio Martini in Bologna; and also received a certificate in Musicology from Dams University, also in Bologna. He has studied in workshops with Barry Harris, Enrico Rava, Paolo Fresu and Danilo Rea. 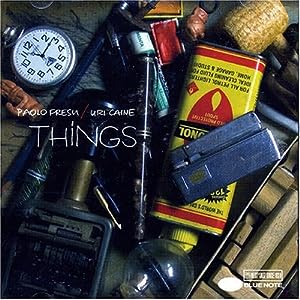 Reaching across the Atlantic, Paolo Fresu and Uri Caine create a subdued, beautifully recorded CD called "Things" (EMI Music/Blue Note (Italy) 2006). Clearly an overlooked disc in both players discography, this is a duo recording that shines a light on the best of both players. For this recording both are restrained and clearly listening to each other, so that the music is beautifully balanced, subtle, and sensual. There are some standards like "Dear Old Stockholm" and "I Loves You Porgy" that are shining examples of the music, but the best of them all is "Cheek to Cheek" , a truly polished gem of viruosity and lyrical play by both men. The the two have also written some beautiul pieces that show the same lyricism and restraint on both player's parts -- neither ever strays from that lovely mood for more than a measure or two -- and even the satirical title of one song in particular,"Cheney's Dick", is a really nice tune despite the expectations I had from the title. Fresu and Caine do sometimes get pretty far out on the edge in other settings, but here they bring out the best in each other, and the tones are wonderful and recording pristine. A real find! 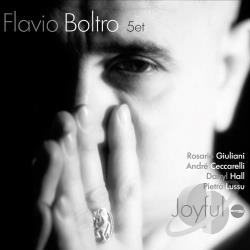 Italian Trumpter Flavio Boltro, one of the younger set of Italian jazz players (born 1961) headlines a quintet on "Joyful" (Bonsai Music 2012) and is joined by some major names in European jazz -- Italy's Rosario Giulani on saxophones, the Frenchman Andre Ceccarelli on drums, Daryl Hall on bass and Pietro Lussu on piano. Three songs feature Alex Ligertwood, a Scotsman who has sung with Santana, Jeff Beck, and Brian Auger's Oblivion Express, and brings a bluesy tone to three songs including "Every Breath You Take" and "Sidewinder". The group is solid if not spectacular, with a nice quartet sound and strong leadership from the trumpet of Boltro and saxes of Giuliani. The disc is very much in the old Blue Note tradition with the two horn frontline, and plays five originals that have that mood, as well as a really short but upbeat closer in Horace Silver's "The Preacher". Their ballad take on "Over the Rainbow" is very nice even if it does not open any new ground. Overall this is a very nice disc but not an outstanding one. It is a nice listen and is not hard to recommend, but it is a notch below the first three.

Finally, a group called "The Cube" has released what I believe to be their second disc "Quiet Yesterday" (Abeat Signature Series 2012). The notes in the package indicate they did another disc in 2008 with many of the same members. "The Cube" is a collective of Italian jazz players and two notable Americans. The group here consists of Dado Moroni on piano, Stefano Bagnoli on drums, Enzo Zirelli on drums, Ricardo Fioravanti on bass, Andrea Dulbecco on vibes, Camilla Sampano Rangoni on percussion and voice on one song, and the two American players --- Bob Mintzer on tenor sax, and Tom Harrell on trumpet.

The group is truly a collaborative. Eight of the ten songs were written by members of the group, and each wrote at least one of the songs. Two songs were from composers not in the group, including Jimmy Van Heusen's "Like Someone in Love" which is played as a duet with only Harrell's trumpet and the soft touch of Fioravanti on the bass. It is a highlight on the CD, but then there are many. There are a wide range of styles and configurations on the CD, from the aforementioned duo to the full group playing on one tune with Camilla Sampano Rangni joining in as a vocalist. Among the standouts are a trio for Moroni's "Quiet Yesterday, with outstanding solos taken by Mintzer and Moroni; the full band on Harrell's "Vision of Gaudi"; and "Easy Living" with another great solo by Harrell backed by Dulbecco on marimba and both drummers. Harrell is easily the standout player on the recording with his soft round tones and deft improvisations, but the group as a whole blends their sounds effortlessly on a first class recording.

So five more Italian recordings to add to the collection. Fresu, Moroni, and Boltro are pretty well known already in Italian and have strong discographies that I will be covering in the Italian series, while Nico Gori and Maurizio Minardi do not. It is those last two, along with the Fresu/Caine duo, that probably are the most interesting of the CDs in this post and well worth the effort to locate and listen  to. So once again, find some vino rosso, formaggio, pane, prosciutto and melone, relax and listen.
Posted by a jazz listener's thoughts at 10:29 AM