How About Trying Some Newbies? (Part 1)

One of the objectives I spelled out in my very first post was to write about new and interesting artists to whom I have been listening, to try to get people to listen to CDs they might otherwise pass by. So in that spirit, I am going to start posting about some folks who are new to the scene, or at least seem to be under the radar, that I have been impressed by lately. This will be the first of multiple postings of this type, which will feature short descriptions of the music, all of which I recommend. 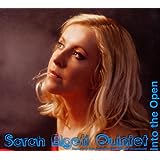 Sarah Elgeti Quintet, "Into the Open" (Your Favourite Jazz Recordings 2012)-- A Danish quintet, she's an impressive talent on tenor and soprano sax, and flute. Her group includes an altoist and baritone player, guitar, percussion, and piano/rhodes. She not only has a really nice sound, but has written all the rather impressive music. All of it is quite approachable, although "Trying to Forget" does step outside a bit; interesting; and played with outstanding voicings among the members.

Taurey Butler, "Taurey Butler" (Justin Time 2012) -- Butler's backstory is really interesting and described in the packaging It includes a degree in electrical engineering from Dartmouth, fluency in Japanese, and a history of playing clubs around his home in New Jersey and New York. But it was Oscar Peterson who he first heard on a CD while in High School  that inspired him to play and finally to land in Montreal, Peterson's hometown, where this was recorded. And it is quite a trio recording, with incredible verve on an assortment of standards and show tunes as well as some originals by Butler himself. The music is outstanding, and highlighted by Butler's own "Grandpa Ted's Tune" and "Nobody's Here," as well as a rousing finale of Horace Silver's "The Preacher." This is a great CD -- down the middle but with incredible feeling and interesting arrangements. 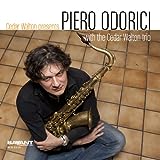 Piero Odorici with the Cedar Walton Trio, "Cedar Walton Presents" (Savant 2012) -- Wow! Cedar Walton has found a terrific young tenor player in Odorici, and with his trio's backing has produced a gem. Odorici has a lovely, full, and rounded tone on his sax, and demonstrates it with an expressive take of standards such as "Over the Rainbow", "My One and Only Love", and "If I Should Lose You." While the CD doesn't break any new ground, staying within the construct of the classic Blue Note recordings, the music is a delight to the ear and highly recommended.

That's it for this post. Lots of good straight ahead jazz to try. More new stuff to come.
Posted by a jazz listener's thoughts at 6:47 PM