Listening to: Kenny Wheeler "Music for Large and Small Ensembles" (1990) 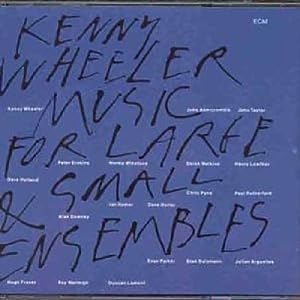 Just a quick entry today. In preparation for the new Kenny Wheeler Big Band disc coming soon on CamJazz, I went back to the collection and am listening to "Music for Large and Small Ensembles" (ECM 1990) which may be a forgotten gem given that since that time Wheeler has largely been seen in small chamber-like settings. This two-CD set, however, shows another side to Wheeler, a more robust sound, more mid-tempo play, and incredible compositional work. Furthermore, the ensemble itself is a roster of first rate players, many still on the scene today and recognized as hall-of-fame category stars; and many of whom will be appering on his new big band disc as well.

Wheeler employs the big band to display the best qualities of his writing, which is always subtly nuanced and colored by the use of unusual combinations of sounds among his players. This big band is not a big band in the sense of the traditional big bands of the previous era or the ghost bands of the 90s, but rather is a sould mate to the sounds produced by Gil Evans and a precursor to the sounds of a Maria Schneider band. Ensemble play at times, small group play at others, and senesitivity between partners characterizes the sounds herein. Inherently emotional, beautifully colored by sensitive players, and highly melodic, it is no surprise to know it is considered part of a core collection by the Penguin Guide to Jazz.

And the roster! Besides Wheeler on trumpet and fluegelhorn, there is John Abercrombie on guitar, John Taylor on piano, Dave Holland on bass, Peter Erskine on drums, and Norma Winstone voice. Any one of these players has a list a mile long of five star CDs, with Taylor and Winstone being my particular favorites (Taylor will shortly have his own new piano trio out on CamJazz as well called "Giulias Thursdays". I have written previously on Norma Winstone for this blog.)

And within the other  sections (trumpets, trombones, saxophones) I want to highlight Evan Parker, Julian Arguelles, and Stan Sulzman, each also a well-known leader with an extensive discography.

This is an outstanding album for fans of Wheeler, or large ensembles, melody, and beauty; and for those who do not know many of this British players, a chance to be iintroduced to open a door on a wealth of new music to listen to.
Posted by a jazz listener's thoughts at 8:29 AM