Dieter Ilg is one more of the many outstanding artists on ACT, both as a leader and sideman for a number of recordings. Ilg is a German bassist well-versed in both classical and jazz music. He began playing stringed instruments at age 6, and at age 13 began to concentrate solely on the bass. He went on to the Freiburg Conservatory where he continued his studies in classical music as well as still learning jazz, but he later advanced his jazz, in 1986-87 at the Manhattan School of Music, and through studies with Eddie Gomez, Rufus Reid, and Ron McClure. In 1987-89 was a part of the Randy Brecker Quintet. He has been a member of the WDR Big Band, and has played as a partner with Marc Copland, and on CDs by drummers Bill Stewart and Ralph Penland. In the 90s he was a part of the adventerous Mangelsdorff/Dauner Quintet. He is now one of the best known German bassists and a first call player for many leading German musicians including Rainer Bohm, Julia Hulsmann, Klaus Ignatzek, Joachim Kuhn. Rof Kuhn, Albert Mangelsdorf, Thomas Quasthoff, Heinz Sauer, and Michael Wollny. He has played as well with Charlie Mariano, Dino Saluzzi, Michel Camilo, Benoit Delbecq, and Alan Broadbent.

pianist Rainer Boehm and drummer Patrice Héral. It is not the first time Ilg has dedicated a work to a famous musician; in 2011 the trio put out "Otello Live at Schloss Elmau" (ACT 2011) in honor of Giuseppe Verdi's opera. 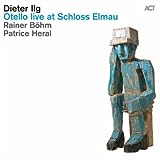 This is another blending of the classical and jazz world but this time played by a trio, which has a major impact on the interpretations. First, if one did not know of the connection to Wagner's work as composer of all but one of these songs, it is doubtful that one would understand the link to the classical. This is very much a jazz recording. It has a strong pulse delivered by the combined talents of bassist Ilg and drummer Heral, and flowing melody lines. and when the trio is going strongly, the interactions are far closer to the classic trio sound than to any impressionistic recordings. It does start quietly with "Zum Raum Wird Hier die Zeit" (all the song titles are in German), with an ominous tune played by the piano over colorations by the drumset and a strong bass pulse. It is pretty and flowing but the lower register play, the slowly evolving melody and ripe pauses sound foreboding at first. Gradually it turns into a lovely, flowing song with all three players involved as the tempo increases along with the dynamics. "Glocken", the next piece starts with the bass setting the pace, followed by a spritely and then stately piano tune. Again all three players take their part in delivering the piece. "Parisfal", the third song, delivers a range of emotions within a four minute span, from highly agitated to dramatic, with the drumset coming to the fore to emphasize that drama, followed by a solo taken by Ilg with quiet support of the others. Very moving in a short time frame.

The remaining nine Wagner pieces range from 44 seconds to six and a half minutes, and each miniature provides the same combination of outstanding skills and partnership, lyricism, and dramatic intent. The final piece "Sehnsucht" is by Beethoven from the Ninth Symphony. It begins quietly with "Ode To Joy" appearing from the piano backed by some brushes and a quiet bass line, and later there is a nice bass bridge from the melody at the outset to the melody again at the end. It is a lovely way to quietly end the CD.

Really nice stuff, another outstanding CD from ACT.
Posted by a jazz listener's thoughts at 10:15 AM