George Robert is a terrific saxophonist and Director of the Jazz Department at the University of Applied Science Western Switzerland in Lausanne. Born in 1960 in Switzerland, he began his musical studies at a young age and by nine was enrolled at the Conservatoire de Musique in Geneva, where he studied clarinet. At 20, he enrolled at the Berklee College of Music and studied alto saxophone, graduating in 1984 with a Bachelor of Arts in Jazz Composition & Arranging Magna cum Laude. He stayed on in New York and in 1985 received a full scholarship to study at the Manhattan School of Music where he played lead alto.  In 1987 he earned a Master of Music in Jazz Performance at the Manhattan School of Music. In addition to free-lancing with such notables as Billy Hart, Buster Williams, the Lionel Hampton Big Band, and the Toshiko Akiyoshi-Lew Tabackin Jazz Orchestra, he formed the George Robert Quartet which earned the Down Beat Award for Outstanding Performance and was invited to perform on the main stage of the 1984 Montreux Jazz Festival.

In 1987 he formed the George Robert-Tom Harrell Quintet, a group from 1987 to 1992 that  recorded five albums. He later moved to Canada, and toured that country as well as the world with his quartet, featuring  Dado Moroni, Isla Eckinger and Peter Schmidlin.

In 1995 George was chosen as Director of the Swiss Jazz School and returned home to lead the program for the next 11 years.  In 2003 he founded the Swiss Jazz Orchestra and earned the Suisse Foundation Award for his outstanding international career. He also toured with Phil Woods during that period and recorded several CDs with him.

He has had a long-lasting musical partnership with Kenny Barron and has toured Europe with him and together they have a number of recordings. In 2006 George moved to Lausanne and was hired as Director of the newly-created Haute Ecole de Musique de Lausanne which has the only jazz department in the University of Applied Sciences of Western Switzerland (HES-SO), the largest university in the country.  In 2009 he was honored by the French government and received the medal of Officer in the Order of Arts and Letters, in recognition for his outstanding international musical career.

So why is he largely unknown in the United States? Most likely becuase his CDs as a leader have been on European labels like TCB, Mons, and GPR so they are not well-publicized here. He first came to my attention a few years ago with the CD "Inspiration" (TCB 2000) as I was looking through Kenny Barron's catalogue and noted how he had often played as a sideman to George Robert. On this particular CD he was joined by Rufus Reid and Kenny Washington. Given such a powerhouse trio behind him, I figured that M. Robert had to be an outstanding saxophonist, and I was proven correct. Since that time I have invested more time and money into M. Robert's catalogue, purchasing "Peace" (DIW 2003), a duo with Barron on the Japanese import label; and several others. 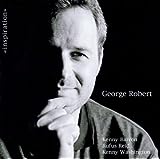 "Inpiration" is taken from a live concert in Lausanne in 1999 with the aforementioned trio of Barron, Reid, and Washington. Robert on alto saxophone is out front and wrote six of the eight tunes. This a a group that knows how to swing. The two covers are "You Don't Know What Love Is" and "East of the Sun". Dedications are clear from the song titles -- "Blues for C.T." to frequent partner Clark Terry, "My Man Kenny" for Barron,  "Dexter" for Dexter Gordon, "Cannonization" for Cannonball Adderley, and even "Mom's Song."  The tribute to Terry is a lively upbeat blues song with a hard driving melody line, while "My Man Kenny" is as one might expect a toe tapping hard bop/post bop piece. Robert has a nice tone on alto and high speed delivery that avoids shrillness, and can really blow it out like on "Cannonization." And Barron picks up the same groove when he comes in, and then Reid to the continuing delight of the audience.  The embodiment of Robert's sound and taste is beautifully heard on the warm and lyrical interpretation of "You Don't Know What Love Is" as a duo with Barron. The trio is fabulous, with Washington pushing the beat and livening the music and some nice soloing from the big sounding Reid. But it is the sophistication of Barron that stands out as Robert's partner as the two trade melodies and imporvisations seamlessly. Barron's touch on "Mom's Song" is a joy to behold when he takes the reins from Robert after his own stirring opening. And Reid doesn't let up with his solo either. Clearly these guys all love their mothers. 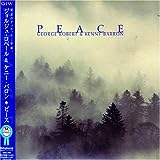 "Peace" is a duo recording by Robert and Barron that is long on lyricism and creativity, as the two tackle three Robert  originals, "Song for Abdullah" by Barron, and six covers including a stunning "Soul Eyes" "Softly as in a Morning Sunrise" "I Didn't Know What Time it Was" and "'Round Midnight." Once again the touch of Barron and alto tones of Robert are well matched to bring out the melodies and emotions inherent in the music, whether they be in the ballads or in the spritely delivery of "Blue Monk." And Barron stuns with his introduction to "'Round Midnight" and the solo outing on "Song for Abdullah."

Once you hear these CDs you'll wonder why George Robert is not a household name in jazz, at least in the U.S. His tone, expressive play, and choice of partners is impeccable, as demonstrated on these and other recordings. This is mainstream music of the highest order.

Posted by a jazz listener's thoughts at 9:41 AM