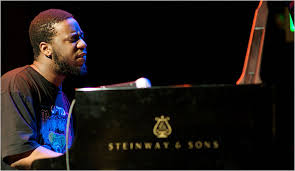 Three years before his debut as a leader with "Mood" (Fresh Sound New Talent 2004) and six years before his breakout CD "In My Element (Blue Note 2007), his second on Blue Note, Robert Glasper recorded a piano trio set under the leadership of Robert Hurst entitled "Unrehurst Volume I" (Bebob Records 2001). A bit of a surprising title, since the next set for the trio did not get recorded until March 2007 and released until 2010 as "Unrehurst Volume 2 (Bebob Records 2010), after Glaper had established himself on the Blue Note label. By the way, in addition to Robert Hurst as leader and bassist, the first volume had Damion Reid on drums and the second Chris Dave.

These are small gems worth finding.


Robert Hurst is a well-established bassist who has worked extensively with Wynton and Branford Marsalis. A native of Detroit, Hurst was born in 1964 and was first recorded in 1985 on a Blue Note CD with the group Out of the Blue, a young all-star ensemble tat included Kenny Garrett, Ralph Bowen, and Ralph Peterson among others. After two CDs with the group, he moved on to play with Woody Shaw and then for five years he played with the Wynton Marsalis Band. He then joined Branford as a member of the Tonight Show Band through 1995, and ocassionally with Kevin Eubanks thereafter. He has worked and toured with many others, including Geri Allen, Dianne Reeves, Vincent Herring, and Harry Connick Jr., and was part of the early configuration of the SFCollective. 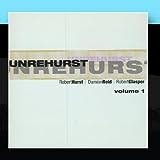 "Unrehurst Volume 1" is just one of many CDs Hurst has recorded as a leader. This is a wonderful set of rather uptempo, energetic mainstream jazz. It has seven tracks, several of which are extended to about 10 minutes to allow everyone to fully explore the songs, their instruments, and their imaginations. "Mr. Thomas" steps up as the first track and sets this tone with its classic melody and fiery improvisations, particularly by the young Glasper. In other cases there is the latin-tinged  "Unflurgenized Colorations", a ballad called "April Foolproof", and some mid-tempo bluesy sounds on "Dr. Bleuss" and "Bu Waynea". 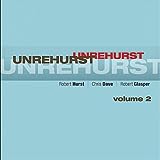 "Unrehurst Volume 2" picks up Hurst and Glasper, along with new drummer Dave, in a recording session in 2007 at the same time "In My Element" was being released to outstanding reviews. The music was held until 2010 and then released and is another fine example of straight-ahead jazz by the trio. This time there are only five songs, three of which exceed 15 minutes but yet are tightly controlled and not given to much in the way of noodling. Hurst wrote two songs and Glasper one, and the others are "I Love You" by Cole Porter and "Monk's Dream" by Thelonious Monk, the latter a particularly outstanding interpretation.

I think any fans of Glasper or Hurst,  and fans of mainstream piano trios will find these two CDs to be outstanding efforts.

Posted by a jazz listener's thoughts at 10:21 AM