Continuing with my current fascination with the extremes of pano play, here are two works that are sometimes pretty hard on the ear and yet are captivating to listen to. They fall right at my previously described edge, the Matthew Shipp/Lisabeth Salander line. 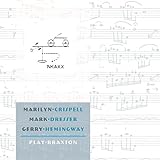 The earlier entry is from the end of 2012 and is "Marilyn Crispell-Mark Dresser-Gerry Hemingway Play Braxton (Tzadik 2012), with the three players respectively on piano, bass and drums. All three share a strong bond with Anthony Braxton, the very knotty avant garde genius of the woodwinds, having spent 1985 -94 in his quartet. And this is very knotty music indeed, a set of five pieces that the trio carefully selected from the vast repetoire that to them represents the breadth and genius of the master.  This is not music for the faint of heart but rather for the adventerous and lovers of the abstract. And it is not Marilyn Crispell as she is heard on her lovely and atmospheric ECM cds.

"Composition 116", the opening piece, sets the stage right away as it opens with a cluster of dissonant chords over sharp drum play, and then gradualy leads into long lines of spiky, well spaced chord play. Crispell's touch is firm and close to staccato as she goes up and down the keys with these clusters, matched closely underneath by resounding drum notes. The entire five minutes is filled with tension, created by the hard piano touch, chords, and jagged lines without any sections played with different dynamics or speeds. And still I liked it, a very modernist piece of music that toes the line between structure and total anarchy nicely.

"Composition 23c" is the second piece and its difference is signaled right away by the opening with a subdued bass solo, followed by some simple and melodic piano. The piece is more soothing with a softer touch and no dissonance. It is still very modern as there is no real sense of a melody; it is more an experimentation with making sounds together either in unison or as supporting players. "Composition 108c/110/69q" is another tune that begins with a very pretty piano part, a bowed basss line and toms underneath. It features the bass in support under the piano and then in response to the piano. It is pleasant to the ear. In the middle of the piece is a riveting pizzicato bass part, and then a very traditional sounding jazz drum solo.

"Composition 69b", the fourth piece, returns to the more harsh sound of the first piece, although it opens with a trio part of subdued chords that gradually merge into a surging set of runs up and down the keyboard. As the piece goes on its dynamics increase, the parts gets sharper and more angular, and eventually the piece begins to sound frantic with hard chordal play, very strong, banging piano chords, and hard drum support. Its not hard to listen to but it is frenetic and pushy. Finally, "Composition 40n/40b" closes the set with the longest piece at twelve minutes, a slow and quiet piece with little piano bursts, a quiet bowed bass, drum colorations, and lots of space. It is very ECMish as it builds from the separated sounds into a more breezy and mellow section with a nice plucked bass over a moving piano that sounds as melodic as anything that came earlier. It almost creates a mainstream jazz feel to round off the CD.

A challenging but ultimately rewarding CD for those who tilt to the far end of the spectrum.

Kris Davis first came to my attention last year with Aeriol Piano (Clean Feed 2012), a stunning set of modernist piano solos. She is back here on Capricorn Climber (Clean Feed 2013) with a quintet: Mat Maneri on viola, Ingrid Laubrock on saxophone, Trevor Dunn on bass, and Tom Rainey on drums. This is music at the edge too as one would expect from this grouping and the label, but again has a great deal of things to offer in terms of fascinating melodies, intersting combinations, and the outstanding sounds particularly of Davis, Laubrock, and Maneri. I do have to note that there are sections that do go a bit far out for me as they involved some odd sounds and combinations.

This is music out of the New Yrok City downtown scene with all the associated images one has of its music. It is a CD of varying extremes: mellow and edgy, free yet structured, flowing and abrasive, quiet and heated. The music at times can be unsettling and full of nervous energy and at other times incredibly peaceful and unhurried. At times the musicians are in in synch and the music is almost chamber-like with the piano, viola and bass play, while at others it is well out there and full of dissonance and arrythmic play.

Davis has said in interviews her goal is to blur the line between what is written and what is improvised. The songs have a lot going on and can get very dense with sounds at times, but there are always pockets of open space and quietude that allow for experimentation. As I noted, the rhythms can change on a dime and can even seem to vary among instruments playing at the same time, so it is only the strong directorial play of Rainey on the drums and Dunn on the bass that keep the structures for each piece in place. This is quirky music, full of mischief and surprise, sometimes not all that pleasant to the ear but manageable to my ear nonetheless and those parts do not last for long spells compared to the rest of the ensemble play. Sometimes consonant and sometimes dissonant, even in a single piece, the music captures the imagination and interest. Pieces begin quietly and build in tension, dynamics and tempo, heating up quickly to amazing sounds, and they can break just as quickly. Tension and release, tension and release -- a constant to the set.

‘Too Tinkerbell’ opens the set with bowed viola and bass as if this will be a chamber piece, but then quickly the piano comes in with some off-center chords and a tinkling melody on the piano's highest octave which shifts the sound into a more modern texture.  The sound gradually builds, the piano  dynamics increase, the tempo gets a bit more fevered and then suddenly a break and the song goes into a very still atmospheric section with no melodic lead, just sounds and phrases and fragments from each player. This settles the piece nicely and reduces the frenetic feeling from the opening section. 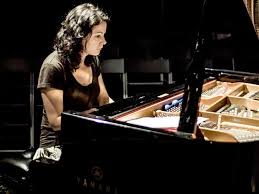 “Pass the Magic Hat,” begins with a nice little piano solo over a syncopated groove, which is followed by the entry of the saxophone in concert with the piano melody. The song sounds like a pretty traditional modern impressionistic jazz piece as the sax enters and plays a nice counter-melody with Davis' piano. Lubrock is restrained and mellow for this piece even as the heat rises in this section. Harmonically simple its a really lovely piece of modern jazz. A break leads to a Maneri lead over some very quiet support, and then the work builds as all the instruments join in and settle into a nice quiet jazz groove. Ten beautiful minutes.

“Trevor’s Luffa Complex,” is named for Trevor Dunn and I guess his loofa. It starts quietly with the bass opening with a nice moving part, and then a melody is introduced on glockenspiel with a quiet sax part underneath. Gradually the dynamics increase and the sax comes out of the background to introduce Laubrock’s tenor solo. The sound is restrained and mellow at first and then gradually the tempo and heat rises, supported by the increasing complexity of the drum part and strong comping from Davis. The sax sound gets a bit harsher, the notes begin to flurry a lot more, and all the quintet's components get in on the action.  A quiet section follows a break and Maneri opens the next section with a meandering viola over some simple piano figures. The quiet of this part once again releases the tension.  After a few minutes they are are back in the groove with everyone playing, with much counterpoint and playing against time, play between consonance and dissonance, and building and resolving tensions. Like the previous piece the music runs the gamut from soft to loud, solo to ensemble, and calm to frenetic.

The title cut "Capricorn Climber" fits the same pattern, a quiet opening builds to a crescendo of intersecting parts by all the members, a bit feverish and chaotic. Graually the saxophone and viola emerge with a nice relasing section, which in turn heats up into a finish full of furious sounds, drones, and energetic play.

And so it goes, a CD of great interst and great contrasts. Parts of extreme quiet and beauty, parts of swirling energies and discordance, all in a fascinating stew of modern avant garde jazz.
Posted by a jazz listener's thoughts at 9:51 AM