More issues with the blogging site -- cannot edit properly, and cannot use tools properly. So please bear with me as I try to do a catch-up post on new music I have bought in the past few weeks. And there is a lot of it. 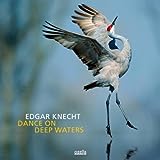 Randy Brecker "Nights in Calisia" (Summit 2013) -- So now that I am on record as saying I prefer my jazz without strings, I am once again retracting that. This is a beautiful and rich sounding CD with the Wlodek Pawlik Trio and Kalisz Philharmonic Orchestra and Brecker sounds as good as I have heard from him.

Edgar Knecht "Dance on Deep Waters" (Ozella 2013) -- Another fine and beautiful CD from another interesting German Label that also produces Helge Lien, an outstanidng piano trio that I have noted before, and the Kari Ikonen Trio (see next). Lovely modern impressionistic music, mellow and lyrical.

Kari Ikonen Trio "Bright" (Ozella 2013) --  Delightful modern piano trio with both originals and covers including "Giant STeps" and "I Fall in Love Too Easy" played with great intuition and imagination.

﻿ ﻿
Tony McManus "Mysterious Boundaries" (Compass Records 2013) -- Acoustic guitar virtuoso from Ireland playing incredibly beautiful solos on a number of classical pieces, a bit different than his past reocfdings which are great but mostly folk tunes . Here the finger picking style is singing on pieces by Bach.Satie, Couperin and others. If you like guitar work this is a real plum. Chucho Valdes "Border Free" (Jazz Village 2013) -- With the Afro-Cuban Mesengers and a guest shot by Branford Marsalis, this is another great one from Chucho and the gang. Great piano playing, great rhythms and arrangaements, an all around hit.


The Aperturistic Trio "Truth and Actuality" (Inner Circle Music 2013) -- Jerome Weidman on piano, Steve Williams on drums and Harve S on bass are a potent piano trio playing pretty traditional mainstream jazz with a real adventerous spirit. Really upbeat and intuitive play by the group, they are having fun and you will too on this easy to miss CD. Watch for it. Widman's an old master with a short discography as leades but one you should seek out on earlier CDs.

Dmitri Kolesnik "Blues for Dad" (Boheme 2001) -- Stumbled upon this fine CD of straqght-ahead mainstream jazz when I went behind the leader and found his playing partners -- Eric Alexander, and Lenny White specifically. Five songs by the leader and one by pianist Andrei Kondakov this is a standard Blue Note quintet group of trumpet, tenor, piano, bass, and drums and that's the sound they get. Have not seen much from Kolesnik since but this is a nice CD nonetheless.

Tingvall Trio "In Concert" (Skip 2013) -- I've been meaning to do a full post about these guys but have never gotten to it so in order not to overlook them entirely I want to note this live effort by the trio of Martin Tingvall on drums, Omar Rodreguez-Calvo on bass, and Jurgen Spiegel on drums. Another of the long line of Northern European piano trios but with its own sensibility brought by a truly international team. Modern impressionism, lyrical, with mixed slow and up-tempo songs, they fit snuggly with Marcin Wasilewski Trio, Helge Lien, and even Bad Plus with a mix of jazz and a bit of rock as well as the pulsing beat from their Latin drummer Calvo. This is their fifth CD -- the others were equally good. This is a highly recommended CD for piano trio lovers -- a bit outside but easy to listen to and love.

More coming in my next post. By the way, I don't love everything I buy and listen to in case you are wondering. But I'd rather post on the ones I like/love and leave the rest unsaid. "If you can't say something nice, say nothing at all."

Posted by a jazz listener's thoughts at 9:43 AM