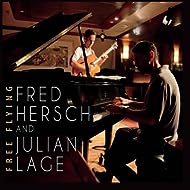 I would guess that almost everyone who appreciates jazz knows the name and music of Fred Hersch but I am not sure how well know his partner on this new CD, "Free Flying" (Palmetto 2013) is.

Julian Lage was born in 1987 in California and was the subject of the Academy Award nominated documentary "Jules at Eight." as a young virtuoso on the guitar. He became a protege of Gary Burton at a very young age and recorded with him on two CDs in 2004 and 2005, Generations and Next Generation. Next he was part of Taylor Eigsti's band on Lucky to Be Me and Let It Come To You, and finally he recorded his first CD as leader at age 22, Sounding Point (EmArcy 2009), which was nominated for a Grammy in 2009. His second CD as leader was the equally impressive Gladwell (EmArcy 2011). His work on the acoustic guitar is riveting, clean and pure sounding, delivered with all of the colors of the emotional rainbow. His influences are clearly from many sources, jazz, folk, chamber, latin, bluegrass are all a part of his soundscapes.

The two partners in this new endeavor, played live at the Kitano in New York in February of this year, are perfectly matched. Both know how to work with virtuoso partners and together they produce incredibly lyrical music. Much of the set is music compposed by Hersch and while much of it is what is generally called chamber jazz, there are some surprises. ""Stealthiness" is as close a free almost avant-garde piece with all sorts of edges but played with enough restraint to be a comfortable fit as it breaks up the flow of quietude nicely. The tango of "Songs Without Words #3 is a highlight, along with the very moving  "Gravity's Pull", and there is a great rendition of "Monk's Dream" to close the set. Whether playing solos, comping, or playing in harmony this is some of the best music I have heard all year.

Hersch has been a force on the jazz scene for a while and Lage is and will be one for a long time as well.  All I can think to tell anyone reading this post is that the music is exquisite and so beautiful that it can give one the chills. Grab a copy when it is one the street in September.

Posted by a jazz listener's thoughts at 10:27 AM