Four CDs that I picked up this week from bands and labels from overseas, respectively ECM, Storyville, ACT, and Pig records. 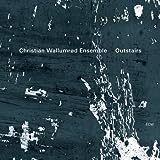 This past week Christian Wallumrod Ensemble released "Outstairs" (ECM 2013), which marks the ninth time the pianist has recorded for ECM as either a leader or sideman and the first release of this ensemble since 2010. Wallumrod has been recording since 1992 using themes from a wide range of sources and while this is broadly chamber jazz it is very sparse and intensely personal, far closer to the avant-garde and therefore takes a lot of patience and time to get used to. Wallumrod blends free-improv, avant-garde, Norwegian folk, early church music, and 20th century classical (think John Cage) into a quietly played stew. The instrumentation is unusual:   Wallumrod on piano, harmonium and toy piano; Eivind Lonning on trumpet, Gjermund Larsen on violin, hardanger fiddle, and viola; Espen Reinertsen on tenor sax; Tove Torngren on cello, and Per Oddvar Johansen on drums and vibes. But though it is a sextet, seldom are all the players involved at the same time, and the voicings vary greatly from song to song, making for some unusual sounds. The music is quiet, the impact is not in dynamic changes but rather in the different blends of the instruments and the use of lots of pauses and spaces between the notes.   "Stille Rock" opens the set with simple piano chords, unusually placed breaks, and quiet drumming that gradually comes front and center wtih the strings. It's strangely captivating, more drama than song.  "Bunadsbangla" is more tuneful, a simple folk melody, and "Tridili No 2" a song built on semi-calssical string sounds. "Beatknit" is perhaps the oddest song, with the piano striking a series of simple chords with various instruments providing contrasts and then the same simple rhythm is picked up by the drum until some ominous droning notes come in at barely pianisimo. This one is more about drama than melody and clearly the most avant-garde piece in the set. "Folkskiss" is anicely done little melody built on the accordion, whcih sounds like a church organ in this quiet setting. "Third Try" is another piece of the avant garde, a piece that begins with ominous tones from the percussion and simple quiet tones from the others, and stays there for three minutes. "Outstairs" is a small tune of delicate melodies and spaces and unusual sounds. "Exp" closes with the most lyrical piece, a piano driven melody that gradually includes the entire ensemble in an impressionistic tune played quietly at a very slow pace.

Lots of modernism and quiet drama here but not lot of melodies or lyricism. Fascinating music/sounds but not for the faint of heart.

The Morten Haxholm Quartet's "Equilibrium" (Storyville 2013) is a nice set of modern mainstream jazz that caught my eye because of the sidemen to Haxholm, a Danish bass player --- Jonathan Kreisberg on guitar, Ari Hoenig on drums, and Frederick Menzies on tenor sax. Its a nice set of eight pieces with a couple of standards including "Night and Day" and six compositions by Haxholm. Haxholm's compositions are bright, played in unusual keys, and scored to provide each of the players with plenty of space.  Kreisberg is particularly effective on the opener, "Giacometti", a nice mid-tempo homage to the sculptor with lots of long and elastic lines. He gives way to Haxholm who solos over the strong base played by Hoenig until Kresiberg and then the band come in to complete the song. "Ezra" is mid-tempo song named in honor of Ezra Pound. The soulful melody is played beautifully by the tenor sax. All of Haxholm's tunes are in this same general tone, nicely witten melodies at a mid-tempo pace with lots of opportunities for each player. The one standard "Body and Soul" has Kreisberg on lead throughout, with a solo for Hoenig. 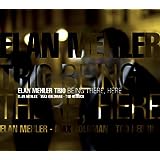 I've come to trust Challenge Records for producing some very fine music and "Being There, Here (Challenge 2013) from the Elan Mehler Trio does not disappoint. Mehler is a Broklyn-based, Israeli pianist, working here with Todd Hedrick on bass and Max Goldman on drums. This is a set of 10 songs covering a range of composers including Ellington, Monk, and Jobim among others, with a single original by Mehler. The music is uncommmonly rich and beautiful, starting in with a dreamy redition of "In a Sentimental Mood," with some nice arco bass play enhancing the sound quite nicely. Lush tones dominate throughout, with quiet beauty shining through on pieces When I Fall in Love" and "Solitude". "Yes Indeed" becomes a slow burner in Mehler's hands as it builds in intensity. Goldman is a particularly subtle drummer who seems to pay homage to Paul Motian with his use of brushes and coloration, and Hedrick controls the tempo and rhythms nicely from his bass. "Bemsha Swing" is riveting, a bouncy piece done initially in the style of Monk but gradulaly growing into a fine up-tempo swing as the title implies. Each piece is finely layered with multiple textures from the combination of the three players, who's classical backgrounds provide some of the emotional overtones for the music. Nothing is rushed and notes are lingered upon to great effect, with touches of players like Mehldau or Jarrett peaking out from the music.

This is an absolutely beautiful CD that any lover of classic piano trios will enjoy. Sensitive play and a love of the music prevails. Highly recommended. 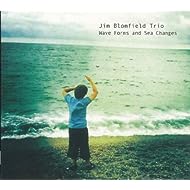 The final entry for this blog is the exciting music of the Jim Blomfield Trio on "Wave Forms and Sea Changes (PIG 2013). This is Blomfield's first CD as a leader and the U.K pianist makes the most of it, along with Roshan Wijetunge on bass and Mark Whitlam on drums. As I listened, here are the adjectives I wrote down about the music:  powerful, exciting, breathtaking at times, and driven. I also noted the very lyrical and long flowing melodies countered with a strong and sometimes slightly dissonant left hand that increases the interest and resonance of the music. This is modern and innovative music that stays within the framework of the mainstream, with just enough use of spiky rhythms and dissonance to heighten the interest within each of Blomfield's ten compositions. The first piece is "Return Of The Easton Walk" and it is full of compositional twists and turns that exite the ears, along with dynamic changes and interesting interplay. Its edgy aat times, flowing at others, and the back and forth creates greata drama nad interest in the piece. is full of ideas, contrasts and exemplary musicianship. A spiky and percussive opening gives way to a flowing, gentle but oh-so-brief melody, before Blomfield returns to the edginess of the opening bars.  "N Trance" follows with another nice tune, as does "Sea Changes." And as the CD progresses, there continues this constant movement between lyricism and dynamic chang, consonance and dissonance, but never is a robust or showy way. The variety increases one's interest in the music, the three members layer each song with thier insturments in an organic way, and the set is well-conceived and flowing.

This is an outstanding debut from a band I hope to hear more from. It has a distinct style and vision in a world of many modern piano trios, one that needs to be heard. Another sound recommendation.

Posted by a jazz listener's thoughts at 9:26 AM