The Kids are All Right! 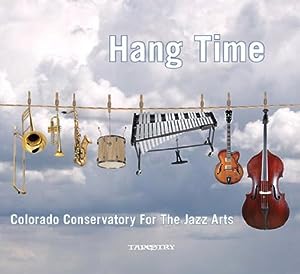 "Hang Time" (Tapestry 2013) is a set of music by two bands at the Colorado Conservatory for the Jazz Arts, one directed by Greg Gisbert and one by Eric Gunnison.

All of the music was written and played by the students, who were grouped into Group Giz, an octet, and Group Gunn, a septet. What the pieces say, first and foremost, is that htere are any number of outstanding young musicians coming out of conservatories around the country (in addition to those coming up through non-conservatory paths), and that jazz should be in good hands for at least the near future. The music here is largely mainstream, derived from the foundations of swing, bop, and post bop, wqith individual touches adding latin, rhythm and blues, and other streams. The music changes from cut to cut ans the composers do, but the solid play is always there, highlighted by some hard working tenors and altos in particular. "Gotta Listen" is a nice funk piece, while "Buenas" stands out for its latin inflections. A big band piece, "Home" is well rounded and give  the ensemble a real chance to demonstrate its tightness and swing sounds.


Nothing showy, nothing spectacular, but a clear demonstration that there are many excellent young players who will be worth following in the future. And kudos to their instructors, here and at all the other schools teaching the next generation.
Posted by a jazz listener's thoughts at 8:31 AM